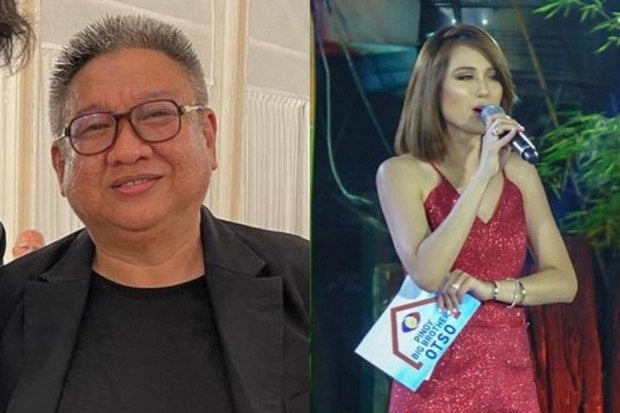 Gonzaga recently went under fire after she hosted the proclamation rally of Ferdinand Marcos Jr. and Sara Duterte, and introduced Rep. Rodante Marcoleta, who was among those who opposed the franchise renewal of ABS-CBN Network.

Matti’s criticism of Gonzaga came after the TV host-actress shared a post from a fan, showing photos of herself during the proclamation rally. The word “unbothered,” all caps, appears above the photos of her smiling. Matti reposted it as well, together with an open letter on his Instagram page yesterday, Feb. 9.

“I cannot fathom anyone, who have access to the same historical facts from our books and [YouTube] like everyone else, can still have the gall to hold their head so high to the point of being so arrogant and obnoxious to brush away critics and dissenters even acknowledging and flaunting it with such an insensitive hashtag,” he said.

Matti stressed that everyone is entitled to their political views but it’s also just right to acknowledge atrocities in history, such as that of Adolf Hitler’s Holocaust and Ferdinand Marcos Sr.’s Martial Law.

“The victims of both the Holocaust and our Martial Law were all real people with names, families and siblings that walked and talked the earth then and even survived by descendants until now,” he stated. “No one can ever say they didn’t exist.”

Matti then pointed out how Gonzaga’s approach on critics was “arrogant” and “disgusting.”

“You can do whatever you want with your celebrity power and God’s guidance because this is a free world, after all. But to be brazen, arrogant and snooty makes all of it despicable, disgusting and really crude,” he said. “Impunity and apathy run so deep in all of us.”

“I can’t believe she actually introduced Marcoleta at an event, the man who was responsible for shutting down the company that built her career,” Henares said. “Hindi lang impunity and apathy eh. Opportunista talaga.” (It’s not just impunity and apathy. She’s also an opportunist.) 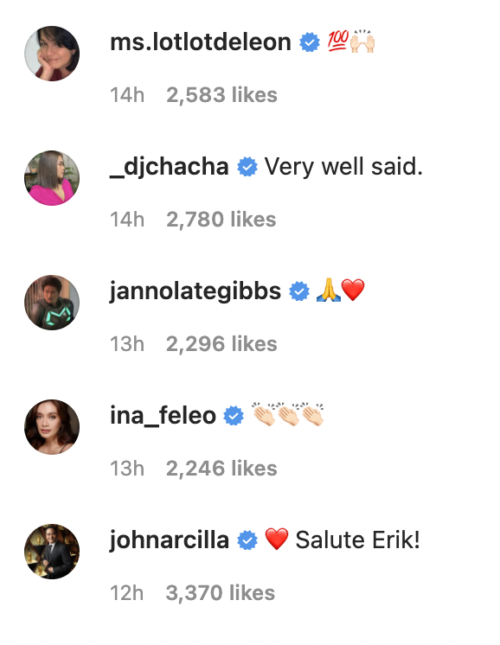 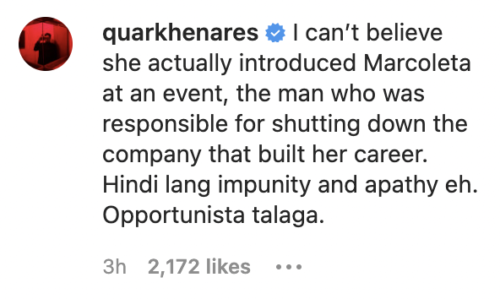 Gonzaga earlier announced her resignation as one of the main hosts of the ABS-CBN reality show “Pinoy Big Brother,” after hosting the show for the past 16 years. She then endorsed the main hosting task to fellow host Bianca Gonzalez, adding that Gonzalez will continue the “PBB legacy.” JB