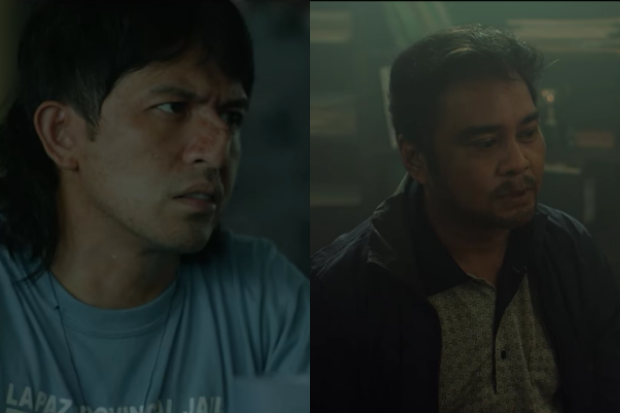 Dennis Trillo as Roman Rubio (left) and John Arcilla as Sisoy Salas in Erik Matti’s “On the Job: The Missing 8” (Images: screengrab from Facebook/@erikmatti)

Erik Matti has finally given fans the first look at John Arcilla, Dennis Trillo and more in the much-awaited “On the Job: The Missing 8.”

“The film will have its world premiere in Venice this [Sept.] 10. And will have an Asia-wide release as part of a 6-episode series this September 12 as an HBO Asia Original series on HBO GO,” the director announced.

“We needed all the help we could get. We couldn’t think of all the materials for the launch so we got the help of friends who can look at the film with fresh eyes and do a take on a trailer. And it turned out to be just awesome!” he added.

The first look of On The Job: The Missing 8 film in this special Venice International Film Festival trailer. The film…

Matti credited Lyle Sacris for the trailer concept and direction, Bien Felix for editing, and Dan Matutina for title concept and design, among others.

The trailer focuses on Arcilla’s Sisoy Salas, a seasoned journalist who is seemingly trying to investigate a series of mysterious disappearances connected to the local government. Playing opposite him is Lotlot de Leon as Weng, another journalist who always tries to uphold the truth and often clashes with Salas due to their conflicting views.

Dante Rivero’s Pedring Eusebio, the mayor of La Paz, is, meanwhile, shown in the trailer as a powerful man who seems to be responsible behind “the missing eight.”

The trailer also shows a much clearer look at Trillo’s transformation as Roman Rubio, a prisoner who fell into the gun-for-hire business, similar to Gerald Anderson’s Daniel in the first film.

Following the premiere of “On the Job: The Missing 8” at the said film fest, Matti’s “On The Job” series will exclusively premiere on HBO GO with six episodes telling the story of both the “On the Job” movies.  /ra

Erik Matti on global premieres of ‘On the Job’ sequel, series: ‘A new world for cinema in PH’