Erik Matti on global premieres of 'On the Job' sequel, series: 'A new world for cinema in PH' | Inquirer Entertainment
Close
menu
search

Erik Matti on global premieres of ‘On the Job’ sequel, series: ‘A new world for cinema in PH’ 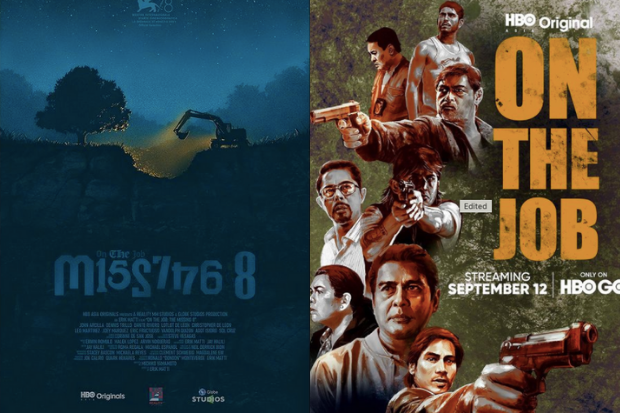 Official posters for “On the Job: The Missing 8” (left) and the “On the Job” series (Images: Instagram/@erikmatti)

Renowned director Erik Matti could not help but be proud of Philippine cinema as his “On the Job” titles are set to take the world stage despite the pandemic.

“We are premiering #OnTheJob #TheMissing8 film in [Venice International Film Fesitval] this coming [Sept.] 10. We will launch #OnTheJobtheseries this [Sept.] 12 on @hboasia,” Matti shared on Instagram on Aug. 31.

“Showing both the film and series in Venice and [HBO] respectively give us so much pride not just for me as a filmmaker but as a Filipino director part of the larger Filipino cinema community in the Philippines,” Matti added.

Matti’s post aptly came with a photo of him pointing his knuckles at the camera, sporting tattoos on each finger that form the words “T*NG INA.” In the first film, Gerald Anderson’s character Daniel has the same tattoos.

“We are hit the hardest by this pandemic and this luck or chance that we got on both fronts, allowing our piece of work to be seen by many despite having the theaters closed, is a testament that the Filipino filmmaker can do it,” the director stressed.

Competing alongside 20 other films, “On the Job: The Missing 8” is the only Filipino production in the lineup this year, the 78th Venice International Film Festival said in a release on July 27.

After its Sept. 10 debut at the prestigious festival, “On the Job” and “On the Job: The Missing 8” will be released as a six-episode series on HBO GO on Spet. 12.

On the films’ milestones in the international scene, Matti noted that “‘On the Job’ signals a new world for cinema in the Philippines.”

“When it used to be just either prestige or economics, now it can be both given the new world we are in,” he stressed. “There is still hope for all of us.”

“I invite you all to see the premiere in Venice. Or stream it on #HBO either way, it gets the film seen by many worldwide which is really the point of making movies for,” Matti added.

In his following post, made yesterday, Sept. 2, Matti shared, “We will carry the banner of the Philippines as we walk the red carpet this coming week.”

“We don’t need to win any award. Just having a Filipino film amongst the international films in competition is enough to show the world that the Philippines still makes movies,” he added.

The post came with the film’s official poster created by Dan Matutina and Ryan Agsawa.

Matti previously shared that the series would show new scenes and storylines that were cut from the first film.  /ra

TAGS: “On The Job: The Series”, “On the Job”, Erik Matti, Film festivals, HBO GO, On the Job: The Missing 8, series, Venice International Film Festival