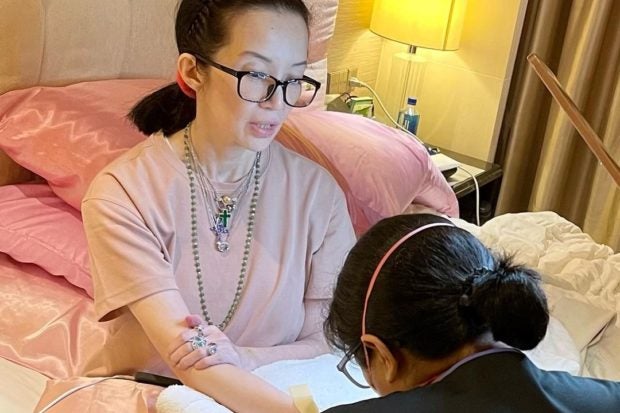 Kris Aquino denied that she was under intensive care and in critical condition amid rumors about her  health.

The Queen of All Media addressed the said health speculations about her while showing herself with her sons, Josh and Bimby, on her Instagram page yesterday, Jan. 24. She and her sons can be seen attending an online novena Mass for her cousin who recently passed away.

“It’s been disturbing that since Friday so many have been spreading fake news about me being either in St. Luke’s [Bonifacio Global City] or the States but always with the same theme, that I’m in the ICU and in critical condition. NONE OF THAT IS TRUE,” she stressed.

The actress then called out “trolls” who seemed to be “excited” to see her pass away after her brother, late former president Benigno “Noynoy” Aquino III, died in June 2021.

“Ayaw akong tigilan ng #fakenews and parang sobrang excited ‘yung mga trolls na within [one] year, both Noy [and] me would pass away. Sorry to disappoint pero buhay at ilalaban pa na mapahaba ang oras ko because kuya Josh [and] Bimb still need me,” she said.

(The fake news would not let me be and the trolls seem to be so excited that within one year, both Noy and I would pass away. Sorry to disappoint, but [I’m] alive and I will fight to extend my time because Josh and Bimb still need me.)

Kris then thanked her “real friends” for reaching out to her and sending her foods, flowers and “just so much na nahihiya na ‘ko (that I’m already getting shy).”

“…they want to [make] me feel their love and affection — you have my lifelong loyalty and gratitude,” she told them.

It can be recalled that in 2018, Kris was diagnosed with an autoimmune disease. She revealed that her condition has caused her drastic weight loss.

Kris also recently denied she planned to reconcile with her ex-fiance, former Interior Secretary Mel Sarmiento. She said Sarmiento left her when she was at her “lowest” and that he “fabricated” stories of his “closeness” to her brother, Noynoy. Kris confirmed her breakup with Sarmiento on Jan. 3.  /ra

‘Not my loss’: Did Kris Aquino just comment on her breakup with Mel Sarmiento?