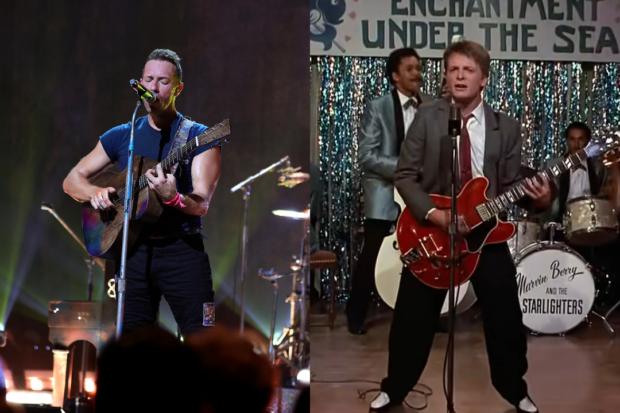 Chris Martin performing live at The Apollo Theater in September 2021 and Michael J. Fox in “Back to the Future” (Image: AFP/Theo Wargo, screengrab from YouTube/Universal Pictures)

Chris Martin of the British rock band Coldplay revealed that the 1985 film “Back to the Future” pushed him to be in his own band and inspired his music career.

The Coldplay frontman disclosed this to fellow singer and TV host Kelly Clarkson during his appearance in “The Kelly Clarkson Show,” as seen on the talk show’s YouTube channel yesterday, Jan. 11.

Martin brought up the subject while recalling that the film’s star Michael J. Fox performed with him and his bandmates in the past. He was talking about his favorite cover songs that he got to perform while on tour.

“My number one probably is Michael J. Fox came and played two of the songs from ‘Back to the Future’ with us in MetLife Stadium. That was really wonderful,” he said. “Him coming to play ‘Johnny B. Goode’ and stuff, that was wonderful.”

Martin noted his special connection with the performance of the Chuck Berry song, as it was what inspired him to be in a band.

“That’s what made me want to be in a band, you know? That scene,” he added while joking that some members of the show’s audience were “probably too young to remember” the 1980s film.

Clarkson seemed amused by Martin’s revelation as she pointed out how the film seemed to be a “random way” to get inspiration. Martin then looked back at his roots and his first-ever recording.

“I grew up in real farmland of England, before the internet,” he said. “The first thing I ever recorded was, there was a show called ‘The A-Team,’ and I had a cassette recorder and held it against the TV to record the theme tune.”

Coldplay recently released its ninth studio album, “Music of the Spheres,” and collaborated with the K-pop boy group BTS for the song “My Universe,” which landed at the top spot on the Rolling Stone songs chart last October.

Martin announced last month that the band, known for such hits as “Yellow” and “Clocks,” will stop recording new music in 2025, although they plan to continue going on tour.  /ra

Cardi B in court as trial begins for libel case vs. vlogger who alleged she’s a prostitute

Read Next
WATCH: Nadine Lustre gets real about her sweaty armpits, takes botox treatment for it
EDITORS' PICK
Novak Djokovic loses fight against Australia deportation
Metro Manila’s daily COVID-19 growth rate drops to 2% — Octa Research
SMDC’s Bloom Residences: A master planned community that cares for your health and wellness
Upsilon, Unilever give ‘real talk’ on climate change crisis
Over 3 Million worth of prizes to be won at Smart Padala’s SENDali Manalo Promo!
COVID-19 cases in PH pass 3.2 million mark with 37,154 new cases — DOH
MOST READ
‘Not my loss’: Did Kris Aquino just comment on her breakup with Mel Sarmiento?
CBCP head: Marcos dictatorship not a ‘golden age’ for PH
Learn from Dengvaxia vaccine controversy, gov’t told
Ivana Alawi tests positive for COVID-19, urges public to comply with health protocols: ‘No one’s above the law’
Don't miss out on the latest news and information.