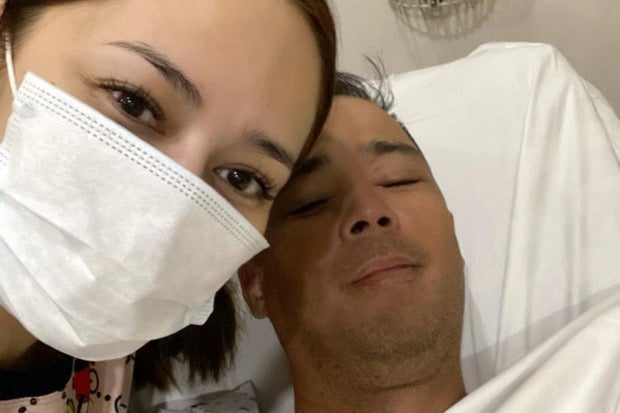 Dingdong Avanzado was hospitalized after being stung by a swarm of bees during his golf game, his wife Jessa Zaragoza shared.

Zaragoza spoke about the incident concerning her husband, which she described as “one of the most memorable and jarring experiences” they have encountered as a family, as seen on her Instagram page yesterday, Dec. 24. She recalled how it was her first time to see Avanzado in a very unwell state after arriving home.

“During Dingdong’s golf game yesterday, he was stung by a swarm of bees. He drove home feeling really sick and nauseated. As soon as he got home, that was the first time I’d seen my husband throw up really bad,” she said.

Zaragoza shared how she was worried that Avanzado might suffer from anaphylactic shock, as the latter initially refused to be taken to the hospital.

“I counted over 40 stings all over his body, the majority on his back, where it looks like the bees invaded his shirt. I tried convincing him to go the hospital, pero ayaw talaga. Buti nakinig sa [anak]!” she said, referring to their daughter Jayda Avanzado.

(I tried convincing him to go [to] the hospital but he really refused. It’s a good thing she listened to her daughter!)

The singer-actress then expressed her gratitude to those who offered their well wishes, noting that her husband is recovering well.

“We hope and pray that he will recover faster. I think that the most important thing right now for our family is the fact that we can celebrate this Christmas being together. Thank you to all our dear friends that sent us well wishes for Dingdong,” she stated.

The couple marked their 20th marriage anniversary last March, as they posted random photos and videos of them being affectionate with each other.  /ra