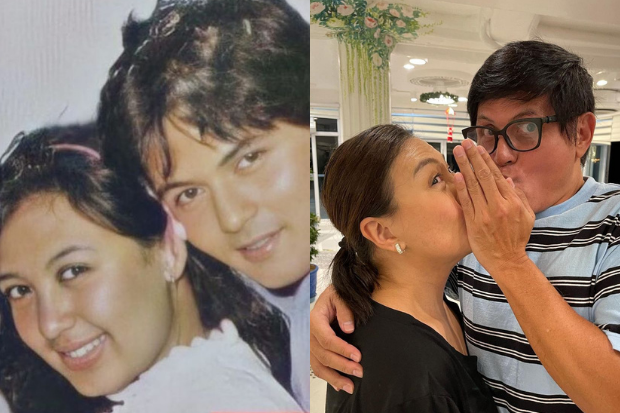 Sharon Cuneta has admitted that she considers her former onscreen partner and ex-boyfriend Rowell Santiago as her “TOTGA,” or “the one that got away.”

The Megastar made this admission while showing a throwback photo of herself with the actor-director on her Instagram page yesterday, Dec. 7.

“I can live without most everyone else (including any other ex) outside of my family, but I can never live without this boy in my life,” she said, referring to Santiago.

Cuneta described Santiago as one of her best friends as well as a great director and leading man. She then compared him to her husband, Sen. Francis “Kiko” Pangilinan.

“Like Kiko, his heart is so pure,” she told fans. “So decent. A true gentleman. Truly TOTGA.”

Previously, Cuneta admitted she had two TOTGAs, though she did not reveal who they were at the time. She also said in an online conversation with fans back in 2018 that Santiago is the only man whose heart she broke and that the names of her great loves start with the letter R.

Cuneta and Santiago were on screen partners back in the 1980s. They starred opposite each other in the films “Cross My Heart” and “Friends in Love,” among others. They started dating after Cuneta had broken up with actor Gabby Concepcion.

The pair is currently working together in the long-running action series “FPJ’s Ang Probinsyano.” Cuneta debuted on the show last month, as the character Aurora.  /ra

Read Next
Rebel Wilson reveals own team wanted her to keep ‘funny fat girl’ image
EDITORS' PICK
Acer starts the year off strong with the Aspire Vero National Geographic Edition
Gear up and get ready to play with Yamaha Mio Gear
PH to import 60,000 tons of fish to cover shortage
Workers are exempted from ‘no vax, no ride’ policy – DOLE chief
Over 3 Million worth of prizes to be won at Smart Padala’s SENDali Manalo Promo!
#VotePH2022: COVID, power woes loom as poll concerns
MOST READ
Guevarra to Acosta: Obey rules on unvaccinated
Emma Stone calls Andrew Garfield a ‘jerk’ after he ‘lied’ about his ‘Spider-Man: No Way Home’ appearance
Cold-case investigation names surprise suspect in Anne Frank’s betrayal
Czech anti-vax singer dies after deliberate infection
Don't miss out on the latest news and information.