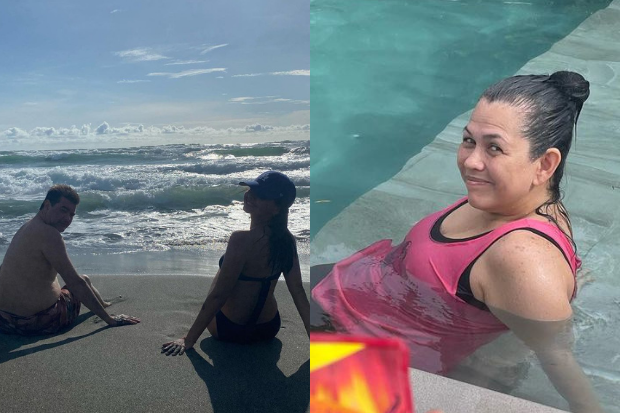 Janine Gutierrez got to spend her first vacation with both her parents, Lotlot de Leon and Ramon Christopher “Monching” Gutierrez, who finally fulfilled a promise that they made when they separated years ago.

The actress admitted feeling sentimental over the getaway while recalling a promise that her parents made when they decided to go their separate ways.

Janine opened up on her parents’ separation while showing moments from their beach vacation on her Instagram page last Saturday, Nov. 27. De Leon and Ramon Christopher can be seen with their children as they bonded at the beach, played video games and roasted marshmallows by a campfire.

“First time to be on vacation with both my parents!” Janine told fans.

“When my parents separated they said we would still be a family and they really lived up to their promise,” she said.

Janine then addressed those whose families are in similar circumstances as hers, while also expressing hope that other people’s situations would not be “bad forever.”

“If anyone is going through something like that right now, I know it’s different for everyone but I hope you know it’s not gonna be bad forever. It’ll take a while but it gets better,” she said. “[If] you’re the parents and you’re worried about your kids, they’ll understand one day and they only want you to be happy.”

De Leon and Ramon Christopher got married in March 1989. Their marriage was annulled 19 years later, in May 2008. De Leon has since been remarried to Lebanese businessman Fadi El Soury in 2018.  /ra

Read Next
Chie Filomeno reveals developing ‘closeness’ with Kyle Echarri
EDITORS' PICK
Acer starts the year off strong with the Aspire Vero National Geographic Edition
Gear up and get ready to play with Yamaha Mio Gear
PH to import 60,000 tons of fish to cover shortage
Workers are exempted from ‘no vax, no ride’ policy – DOLE chief
Over 3 Million worth of prizes to be won at Smart Padala’s SENDali Manalo Promo!
#VotePH2022: COVID, power woes loom as poll concerns
MOST READ
Guevarra to Acosta: Obey rules on unvaccinated
Emma Stone calls Andrew Garfield a ‘jerk’ after he ‘lied’ about his ‘Spider-Man: No Way Home’ appearance
Cold-case investigation names surprise suspect in Anne Frank’s betrayal
Czech anti-vax singer dies after deliberate infection
Don't miss out on the latest news and information.