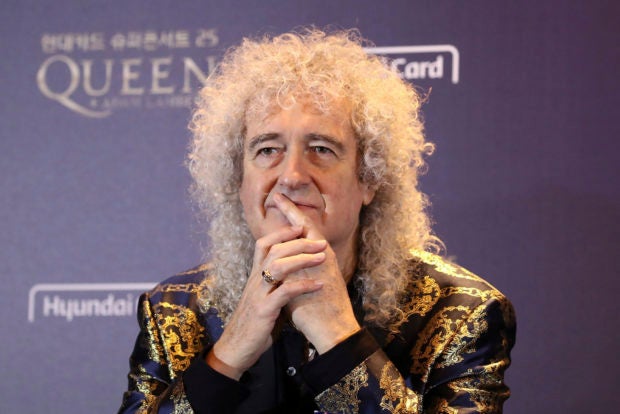 Brian May, of Queen, attends a press conference ahead of the Rhapsody Tour at a hotel in Seoul. Image: AP/Chung Sung-Jun/pool

Guitarist Brian May expressed his “sincere apologies” for saying that his band, Queen, would have been forced to have a transgender person to survive today’s music industry.

“[Queen] would be forced to have people of different colors and different sexes and we would have to have a trans [person],” he said during the British commercial and programming showcase, ITV Palooza on Nov. 23, as reported by The Mirror on Nov. 24. His statement was apparently in response to Britain’s popular music awards show, The Brits, scrapping its male and female categories in favor of being “as inclusive as possible.”

May clarified his statement in a public apology, as per his Instagram page on Nov. 28.

“I should have known better than to talk to those predatory press hacks. Sincere apologies to anyone who has been hurt by the stories. My heart is open as always to humans of all colors, all creeds, all sexes and sexualities, all shapes and sizes – and all creatures. We all deserve respect and an equal place in this world.”

May also stressed that his words were “subtly twisted” by the press.

“Yes — I was ambushed and completely stitched up by a journalist at the recent ITV event. And it’s led to a whole mess of press stories making it look like I’m unfriendly to trans people. Nothing could be further from the truth,” he said.

May signed off his apology by thanking those who defended him amidst the controversy, adding that it meant so much for people to have had faith in him.

“And my grateful thanks to all of you who stepped up to defend me in the last couple of days,” he said. “It means so much that you have faith in me. With love – Bri”

Adam Lambert, who has been touring as the lead vocalist for Queen since 2012, showed support for May in the comments section by posting four red heart emoji.

Lambert is openly gay and a founder of the non-profit LGBTQ+ human rights organization, The Feel Something Foundation in 2019. Its mission is to support other LGBTQ+ organizations that help in building LGBTQ+ inclusive communities, particularly in the areas of education, home security and suicide prevention.

May commented that their former lead singer, Freddie Mercury who died aged 45 in 1991 after contracting AIDS, would have found today’s the politically correct culture “difficult.”

“For instance, Freddie came from Zanzibar, he wasn’t British, he wasn’t white as such — nobody cares, nobody ever, ever discussed it,” he was quoted by The Mirror as saying. “He was a musician, he was our friend, he was our brother. We didn’t have to stop and think: ‘Ooh, now, should we work with him?'” JB

WATCH: Queen releases ‘You Are The Champions’ for healthcare workers