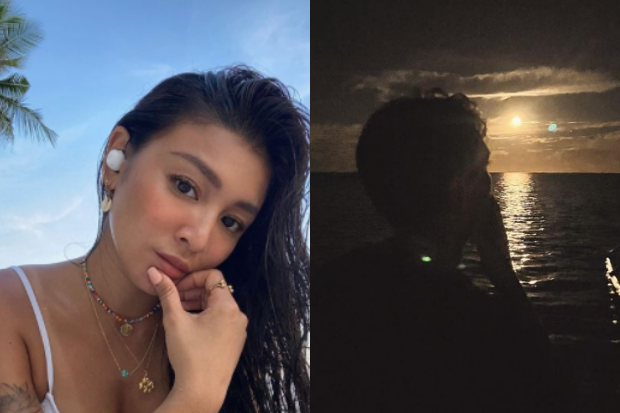 Nadine Lustre may be slowly opening up about her love life as she gave fans a glimpse of a moment at the beach with her rumored boyfriend. She also mentioned his name for the first time on social media.

While she is yet to confirm if she is now in a new relationship, the actress showed a silhouette of a man looking at the sea on her Instagram page yesterday, Nov. 22. She tagged the man as Christophe Bariou, who is speculated to be the one she has been dating over the past few months.

This marks the first time Lustre has mentioned Bariou’s name on her Instagram page.

Fans started speculating that Lustre now has a new boyfriend after she was reportedly spotted with a Frenchman on Siargao Island earlier this year. She was also seen holding hands with the same man last October and he appeared to have spent time with the actress’ parents this month.

Lustre did not mention further details about Bariou, though fans described her beach moment with him as her “jowa reveal (boyfriend reveal).”

(I ordered a Halloween costume reveal, miss Nadine. Why do you always give us a boyfriend reveal? Are you trying to make us jealous?)

Lustre was previously in a relationship with actor James Reid. The pair, formerly known as the love team JaDine, announced their breakup in January 2020, after three years of being a couple.

Lustre and Reid have since worked together for the actress’ 2020 album “Wildest Dreams.” They have also been seen together with each other’s friends and family even after their split.  /ra

Read Next
After husband and father roles, Tom Rodriguez now working on having kids for real
EDITORS' PICK
NUSTAR Resort and Casino: Cebu’s next lifestyle and leisure gem
PH records over 18,000 new COVID-19 cases for 2nd straight day
Step up your vlog game with vivo’s newest smartphone
COVID-19 cases in NCR, nearby provinces now going down — OCTA
Rise to perfection: Spot on tiles for your stair risers
I’ll fight evil and misdeeds no matter what it takes—Guanzon on BBM party’s disbarment threat
MOST READ
Palace: Facility quarantine no longer required for fully vaxxed travelers starting Feb. 1
6 areas to be placed under Alert Level 3 from Jan. 28 to Feb. 15
Fully vaxxed nationals of non-visa required countries allowed entry to PH starting Feb. 10
Leni mansplained? Abunda ‘interruptions’ stir own buzz
Don't miss out on the latest news and information.