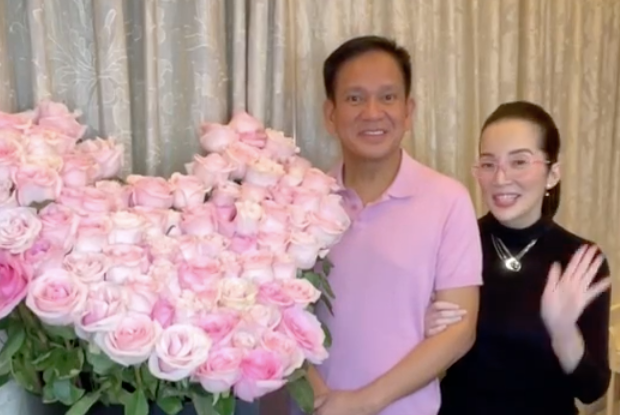 Kris Aquino gave fans some details on her upcoming wedding with former Interior Secretary Mel Sarmiento, saying it is planned to be a “tiny” affair.

Aquino spoke about her wedding plans when she responded to a fan’s comment on her Instagram post about a big bouquet of flowers last Monday, Nov. 8. The netizen, @anrymven, said she was anticipating the actress-TV host’s “grand wedding entrance,” but Aquino said it is not what she and Sarmiento have in mind.

“I don’t mean to be a spoiler nor disappoint you but our wedding is going to be tiny and super private,” Aquino answered the netizen.

She added that her upcoming union with Sarmiento will also not have an entourage and a wedding planner.

“Totally not what you’re expecting,” she told fans. 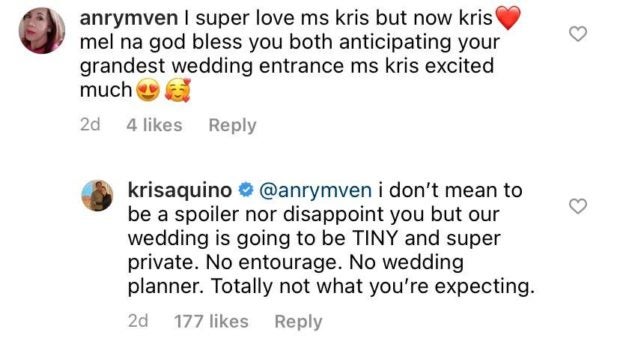 Aquino and Sarmiento made their relationship public in August and announced last October that they were about to get married. Their engagement received the approval of Aquino’s younger son Bimby.

The two recently went on their “first date,” wearing a gown and barong Tagalog in a fast-food restaurant.

Sarmiento also declared this week that he will spend the rest of his life with Aquino and stressed that he does not believe they will separate.  /ra