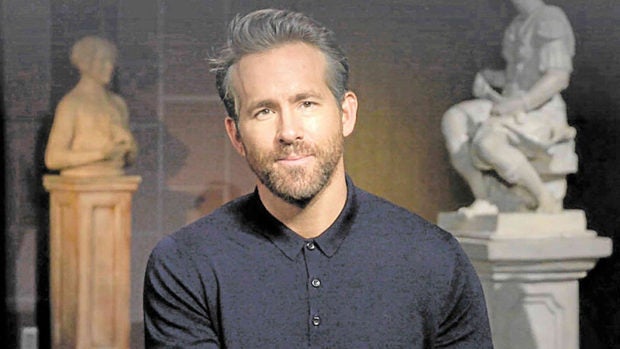 Even Ryan Reynolds knew that getting him to team up with Gal Gadot and Dwayne Johnson was a high-wire act that their slick and stylish Netflix film “Red Notice,” which premieres on Friday, has managed to pull off, with high-octane flair and comedic relish.

It isn’t every day that you can get all three of these Hollywood A-listers to star in a film that plays well to their strengths as performing personas. In our view, it’s a dream team that lives up to its promise—a fun and breezy action romp that’s greater than the sum of its predictable parts.

“That’s what sets the movie apart,” Ryan told Inquirer Entertainment during a roundtable interview with the Asian press last Friday. “It’s very hard to get Dwayne, Gal and me in a room together, let alone in a whole movie. They used to do this in the good, old days of Hollywood. But leave it to Netflix to figure out some way to do it. ‘Red Notice’ certainly had some tricky and wildly complex scheduling issues to meet—and they did it.”

The globe-trotting and immensely entertaining film is about FBI profiler John Hartley (Dwayne) who is in hot pursuit of two competing but slippery art thieves, Nolan Booth (Ryan) and Sarah Black aka The Bishop (Gal). The elusive cons are in a race against time to steal Cleopatra’s three golden eggs, which are now worth $300 million.

While Dwayne delivers the muscle needed to give this actioner its instant believability, it’s Ryan who brings forth the witty wisecracks and laugh-out-loud one-liners that provide winking moments of levity to the brisk narrative proceedings. For her part, Gal, whose films benefit from her formidable screen presence, holds her own in a role that allows her to be more playful and naughtier than usual.

For comic-book and superhero geeks, “Red Notice” is the next best thing to a crossover between Marvel (Ryan’s “Deadpool”) and DC (Gal’s “Wonder Woman,” Dwayne’s upcoming “Black Adam” and, who could forget, Ryan’s “Green Lantern”).

But which does Ryan think would get the upper hand if he, Gal and Dwayne were to end up in a three-way mano a mano? And who would be the weakest?

“Tough question,” the actor quipped. “I would say that it’s a toss-up between Dwayne and me as the weakest, only because Gal is very elegant, very flexible and clearly has some significant training in this. Now, if Dwayne gets his hands on you, you’re done. But I know that I’m faster than Dwayne! So, if there’s something that goes a little too far, I know that I can run away!

“So, I would say that that Gal is probably the best all-around fighter. Me, I’m not a fighter. I’m mostly a bit of a chicken. So as you’ll see in the movie, I usually avoid the fights as much as possible and stick to the stealing. “It’s always interesting working with larger-than-life personalities because you never know how it’s going to go. Thankfully, we all knew each other, so there wasn’t any of that concern. But I’m also a fan of film and of movie stars.

“People don’t realize that just because I work in this industry, where I’ve been for almost 30 years now, I still get excited and get all geeked-out. When Dwayne or Gal walks in the room, I get a little starstruck, just like everybody else.”

Our Q&A with Ryan:

As with “Free Guy,” it was a lot of fun watching you do your thing in this film, thanks in large part to your hilarious one-liners—like, when you compare the back of Dwayne’s head to a huge penis. Can you share with us the method to your comedic madness? Are those lines improvised on the fly? Are they part of the script?

Yeah (laughs). Well, that particular joke notwithstanding, I generally try to do five or six, sometimes 10, alternate versions for each joke. It’s a bit of a stretch to say they’re improvised. I write them out in advance and then just fire them up. I do some that are “clean and family-friendly.” Then, I do some that are somewhere in the middle. Then, I do jokes like that one that they probably won’t use—but they end up using sometimes (laughs). But I leave it to [writer-director] Rawson Marshall Thurber to choose that stuff.

I didn’t produce the film. With the movies that I do produce, I’m much more hands-on with which ones we use and where and how. I’d give Rawson a whole bunch of options and let him figure out which one he felt was best.

As far as my brand of comedy is concerned, I think humor and wit in movies are byproducts of personal pathos. You can’t really have any understanding of the dynamics of comedy unless you understand its opposite. I do see comedy as an underappreciated medium in the film business.

Comedy is a very challenging art form, and I have a great deal of reverence and respect for it. I do owe a huge debt of gratitude to those who’ve come before me. I grew up watching the Peter Sellers, Steve Martins, Eddie Murphys, John Candys and the Gene Wilders of the world. Their sense of humor shaped me in a lot of different ways.

“Red Notice” is a perfect blend of adventure and humor. What do you think makes this genre so popular among all age groups?

I don’t know specifically. A lot of people love action-comedy adventures. I personally love treasure hunts, which is part of the DNA of this movie. I grew up watching films like “Indiana Jones,” “National Treasure” and “The Thomas Crown Affair,” which is its own version of a treasure hunt and a heist movie.

Can you talk about the funny banter that you had with Dwayne and Gal? Was it as funny on set as we see it in the film?

There’s a lot that was left on the cutting-room floor. We spend most of the time trying to make each other laugh. I was frankly surprised at how many lines ended up in the movie that I wasn’t intending to be in it. I was just trying to make Dwayne laugh and make him ruin a take and delay us. 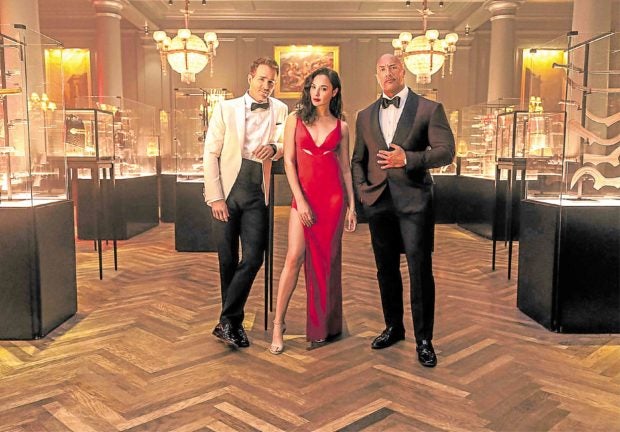 From left: Reynolds, Gadot and Johnson in “Red Notice” —PHOTOS COURTESY OF NETFLIX

But yeah, it was an exceptional experience because these are friends of mine. Dwayne and I have been friends for 21 years. And I’ve known Gal for a little less than 10 years. So, it’s like going to work with your best buddies—and that’s the best way you could possibly go to work. I didn’t take that for granted.

Despite being a thief, your character seems like he has a good heart and has this constant need to prove himself. How do you think would a character like Nolan Booth have affected you if you had met him when you were growing up?

A guy like Nolan has this unquenchable thirst for validation that he’s probably never going to figure out. I mean, he’s fundamentally a broken person. There are parts of my personality that are pretty broken as well, and I use them or exploit them to work in genres like this.

But I don’t know if Nolan would be able to teach me anything. He is a cautionary tale for not resolving some of your past childhood issues before you actually become a grown-ass adult. He hasn’t really figured that stuff out, which is what makes him amusing. But this is also what makes him a low-life thief.

During the “6 Underground” junket in Seoul two years ago, which now feels like a lifetime away, you said that doing action scenes or hand-to-hand combat was more exciting than challenging. How have the working conditions on an action-film set changed during the pandemic?

There was a tremendous host of health hurdles that everyone needed to clear before they could even enter a room on a set like this—the protocols were incredibly strict. I don’t think it’s hyperbole when I say that Netflix really set the bar high for how to do it in an intensive way.

We were one of the first movies ever to come back in the pandemic, so you know it was a little off-putting because Dwayne, Gal and I were the only people not wearing a mask on the set … because we were on camera. Everybody followed every single rule to make sure that we would stay healthy, because if one of the three of us would get sick, the whole movie would shut down—and 400 people would lose a job! We didn’t want to be responsible for that.

Every time we see you onscreen, you always manage to up your own game. It’s pretty much like you’re competing with yourself and your previous characters. Does that put any pressure on you?

Oh, that’s a good question. Yes, a little bit. But the next movie that I have coming out is called “The Adam Project,” which is also a Netflix movie. It’s a blockbuster kind of film, but its story is much more personal and far more emotionally grounded than something like this—there’s no intense sarcasm or pop-culture references.

It was inspired a little bit by “E.T.”—in tone, but not necessarily the subject matter—and by some of those movies that I used to love as a kid. I don’t feel as much pressure as excitement to tell different kinds of stories. “Free Guy” was quite surprising for people, and I think “The Adam Project” will feel like that, as well. INQ