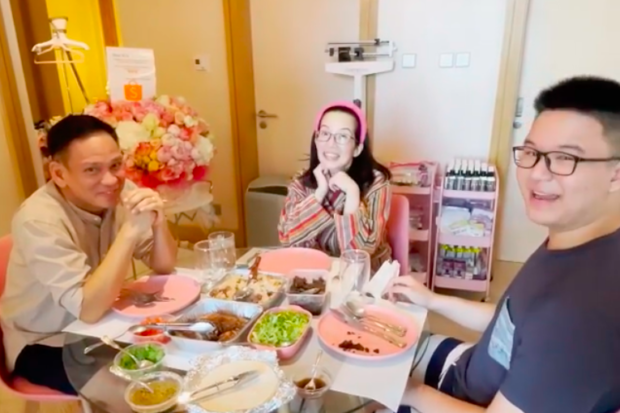 Kris Aquino did not have a hard time seeking the permission of her youngest son Bimby Aquino before giving her “yes” to former Interior Secretary Mel Sarmiento’s marriage proposal.

Bimby explained how he personally witnessed Sarmiento’s love for his mother and their family in a video on the actress-TV host’s Instagram page yesterday, Oct. 27. He was asked by Kris why it was easy for him to approve of her engagement.

“It’s because he loves you, no agenda at all. And you can really tell that he wants to take care of you, me and Kuya,” Bimby told Kris. “Basically, I can tell whenever he looks at you, his eyes twinkle-twinkle. You can feel he genuinely loves you, mama.”

Bimby also joked there will now be “two macho men” in their home following the engagement. Kris’s other son Josh is currently staying in Tarlac.

Prior to asking Bimby in the video, Kris can also be seen dining at home with him and Sarmiento, sharing a meal sent by her sister Viel. The couple thanked fans for the kindness they received after announcing their engagement. Bimby told the two that he believes they “deserve each other” and that he’s very happy for them.

Kris called her brother, former President Benigno “Noynoy” Aquino III, their “matchmaker in Heaven” as she recalled moments from her relationship with Sarmiento in another Instagram post, also yesterday.

She added that the next video featuring Sarmiento on her social media accounts will be their wedding video. JB

Kris Aquino on son Josh’s 26th birthday: ‘He helped me grow up’