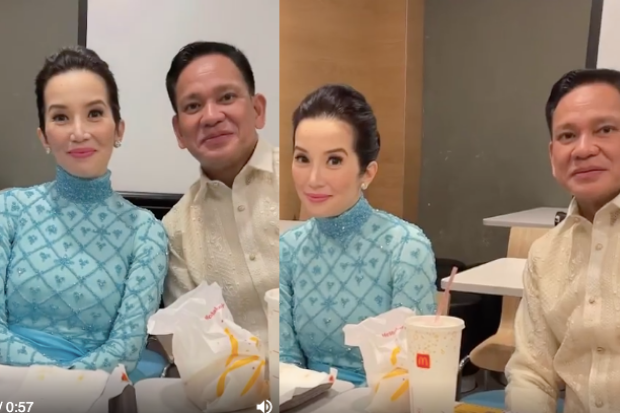 Kris Aquino and her fiance, former Interior Secretary Mel Sarmiento, had quite a memorable “first date” as they ate at a fast food restaurant in a gown and barong tagalog.

The actress-TV host explained that she and Sarmiento were on their way home from a wedding when they passed by a McDonald’s branch in Silang, Cavite. Aquino donned a blue long-sleeved, turtle-neck gown while Sarmiento wore a barong Tagalog and slacks.

“It was more than [three hours] to get back kaya nag-stop sa fast food (so we stopped by at a fast food outlet) and it’s been years since I’ve entered that particular brand,” Aquino told fans.

She added that Sarmiento and the service crew at the fast food outlet were amused by her and it felt good to act like a “normal, regular person.”

One of Aquino’s companions did point out to her that people do not dine in fast food restaurants wearing gowns, but the actress did not let the comment stop her.

“I said walang basagan ng trip (don’t mess with what I want to do),” she recalls saying. She also thanked the employees at the fast food for serving her and Sarmiento.

“[This is the] first time Mel and I ever ate out so you can say it was our first date — we won’t forget you,” she said.

Kris Aquino on son Josh’s 26th birthday: ‘He helped me grow up’