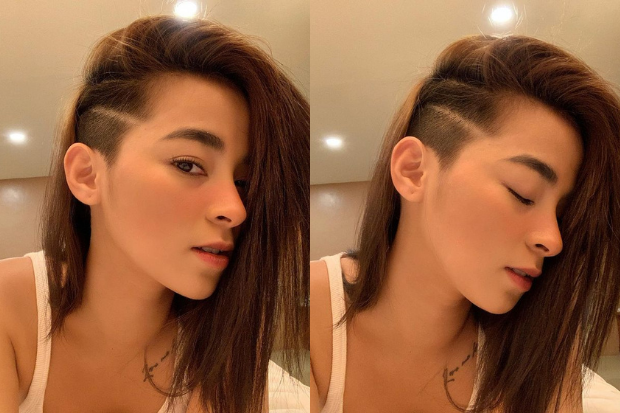 AJ Raval ended her social media hiatus earlier than expected with her return to Instagram weeks after she wiped her page clean. This is amid speculations that she was involved in the breakup between fellow actors Aljur Abrenica and Kylie Padilla.

The actress-vlogger informed fans last Oct. 20 that she wanted to take a “social media detox” for her mental health, adding that she was going to step away from her online accounts until next year. She also removed all posts on her Instagram page last month. She however maintained activity on her Facebook page, inviting fans on Oct. 23 to subscribe to her YouTube channel.

Despite her earlier statement, Raval updated her profile by showing her new undercut hairstyle on her Instagram page yesterday, Oct. 31, which may suggest she is now back on the platform.

It appears the hairdo will be her look for an upcoming action movie directed by Roman Perez Jr., based on the hashtags she used.

Raval admitted last October that she and Abrenica were “getting to know” each other, but denied that she was the reason behind Abrenica and Padilla’s breakup.

The actress-vlogger later shared Abrenica’s “breaking silence” statement, which appeared to have insinuated that Padilla cheated on him. Raval eventually deleted the post and apologized to Padilla, stressing that she was only defending herself from critics.

Kylie’s father, Robin, confirmed his daughter’s separation from Abrenica in an interview with talent manager Ogie Diaz last July. Robin declared it is impossible for men to avoid cheating, leading fans and observers to speculate that Abrenica cheated on Kylie. The action star also drew flak for his assertion, which was deemed sexist by netizens.