Billie Eilish urges ahead of COP26: Speak up to save our planet | Inquirer Entertainment
Close
menu
search

Billie Eilish urges ahead of COP26: Speak up to save our planet 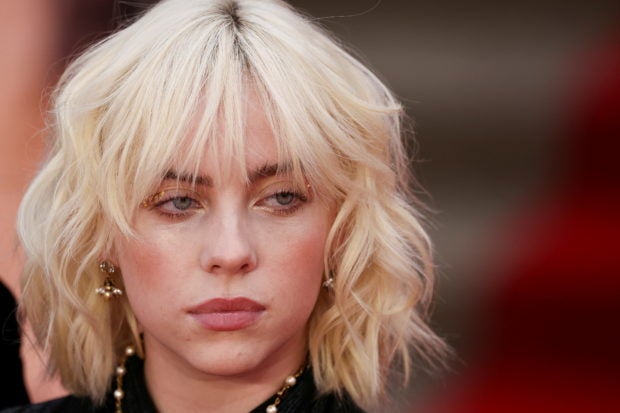 Singer Billie Eilish poses during the world premiere of the new James Bond film “No Time To Die” at the Royal Albert Hall in London, Britain, Sept. 28, 2021. Image: Reuters/Henry Nicholls

LONDON — Music star Billie Eilish joined forces with scientists from the group Arctic Basecamp on Tuesday, calling on world leaders to stand together and take urgent action at the United Nations COP26 climate summit next week.

The singer recorded a video message, with “The Office” actor Rainn Wilson, explorer Levison Wood and Robert Irwin, son of the late Australian conservationist Steve Irwin, also lending their voices to the project in conjunction with Britain’s University of Exeter.

“This year our leaders are deciding the global actions required on the environment climate emergency in a critical decade for our planet,” Eilish said. “We must stand together and speak up to save our planet, not just for us, but for our future generations, and we need urgent, urgent action now and to work together as one.”

Britain has cast the summit as the last big chance for countries to commit to steps to slow rising temperatures.

“Courage. That’s what our world’s leaders need more than anything. The decisions that they make about the climate crisis in the next decade are the most important decisions in our planet’s history,” Wilson said.

Arctic Basecamp was founded by Gail Whiteman, a social scientist who studies how decision makers make sense of environmental threats such as climate change. The group has set up a tent camp for scientists at the World Economic Forum in Davos and will be attending the COP26 summit.

“This is a crisis and the Arctic is sounding the alarm,” Whiteman said in a statement. “It is time that world leaders come together to create real change that ensures a safe future for humanity.” JB

Read Next
Adele to play first concerts in five years with London Hyde Park shows
EDITORS' PICK
Acer starts the year off strong with the Aspire Vero National Geographic Edition
Gear up and get ready to play with Yamaha Mio Gear
Over 3 Million worth of prizes to be won at Smart Padala’s SENDali Manalo Promo!
Metro Manila posts lowest temperature yet this ‘amihan’ season at 19°C
DOH: 28,471 new COVID-19 cases in PH; active cases now 284,458
On Day 2 of implementation, gov’t says workers now exempt from ‘no vax, no ride’ policy
MOST READ
Cold-case investigation names surprise suspect in Anne Frank’s betrayal
Emma Stone calls Andrew Garfield a ‘jerk’ after he ‘lied’ about his ‘Spider-Man: No Way Home’ appearance
Derek Ramsay on being married to Ellen Adarna: ‘Gumaan ‘yung mundo ko’
Czech anti-vax singer dies after deliberate infection
Don't miss out on the latest news and information.