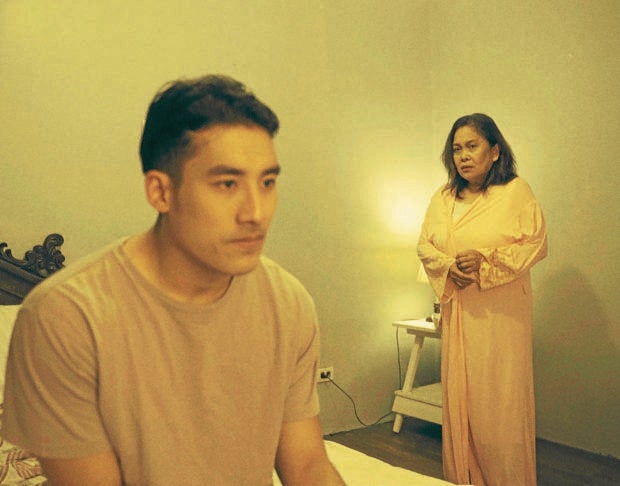 Award-winning actress Ruby Ruiz confessed to being able to relate to her character in the short film “Ang Pagdadalaga ni Lola Mayumi,” not because she’s a late-in-life virgin like Mayumi, but because she was “very naive” and had “hang-ups about sex while growing up.”

“When this was offered to me, I immediately found the film title interesting. After reading the script, I realized that I was able to relate, not because I’m still a virgin but because I’m a woman who had lots of issues and hang-ups about sex while growing up. I was already married when I got over them,” she told Inquirer Entertainment on Thursday afternoon.

“I’m like this because of how I was raised. I grew up hearing that I shouldn’t ride a bike or take ballet lessons because I’d lose my virginity. I was very naive. I actually believed that I would get pregnant if I get kissed by a man,” Ruby recalled. “That’s why I demanded that my first boyfriend marry me because he had already touched me—he didn’t even get to kiss me yet. I can relate to my character in so many ways. I had so many qualms about sex and all the taboos related to it.”

In “Ang Pagdadalaga Ni Lola Mayumi,” a virginal old woman hires a call boy (Julian Roxas) to change her perspective about men. When the two meet in a rented room, an unlikely connection forms between them. After a night of intimacy and vulnerability, the two start to question their beliefs—with Lola Mayumi asking, “are men really all bad, or are there actually good men out there?”

Ruby, who is also a known acting coach, explained that she tackled the role by dividing her emotions into three phases. “First, Mayumi felt nervous. This is the obvious feeling when you’ve finally decided to get out of your shell and do something unusual,” Ruby pointed out. “For the second phase, I allowed Mayumi to feel kilig and flattered when the call boy started kissing her. Anyone who is being kissed for the first time would feel a sensation, whether it’s pleasurable or not. For the third phase, the act of lying down on the bed with the call boy triggered bad memories of when Mayumi was a young girl. She felt scared and traumatized.”

Ruby is all praise for her young costar, Julian, who portrays the call boy in the film. “He is very respectful. When I saw him for the first time, I jokingly said, ‘You’re so handsome! Baka totohanin kita!’ Seriously, I liked that he didn’t mind it when I gave him pointers on how to attack his character. I also told him, when it comes to the kissing scene, that he shouldn’t worry, that he should just do whatever he felt like doing as the character.”

Captain of the ship

Asked to describe her director, Ruby said: “Shiri seemed very idealistic when I met her virtually, but when we all got to the set, I saw that she came prepared. She knew all the shots she wanted. She gained my respect. Just like in every project I make, I would suggest stuff to the director but I follow his or her lead. After all, the director is the captain of our ship.”

Shiri, who is currently pursuing her film degree at Meridian International College in Pasig City, said she hoped her Cinemalaya experience would teach her “to believe in myself more. I had a lot of doubts about making this film. I questioned my decisions as a writer and director in terms of doing justice to what I wanted to talk about. I had questions like ‘Would people care about this story and would they even like this film?’”

When asked to recall the difficulties she had to hurdle while doing the 20-minuter, Shiri said: “It was difficult to be able to pull off everything in a span of merely three weeks.”

Shooting with a small crew was also tough, she added. “I had a crew of six people and they are all around my age, and we are all students. Finding a schedule that would fit everyone and being able to keep the number of members to a minimum for safety added to that challenge. But the term ‘quality over quantity’ applied to the shoot because not everyone had only one role. Everyone was helping each other and it made shooting way easier,” said Shiri.

“Shooting in the new normal is not easy. It helped me, the cast, and crew in a way to think outside of the box, and to maximize the limited time and resources that we had,” Shiri explained. “Lastly, the story was also a hurdle in terms of making sure it was the right story that people would see, hear and understand.” Cinemalaya runs from Aug. 6 to Sept. 5 via ktx.ph. INQ