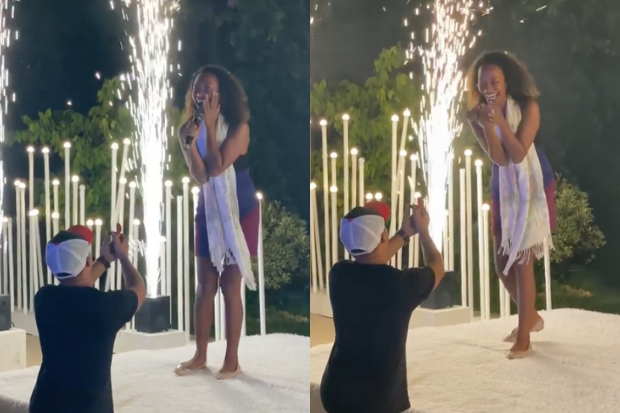 Actress Wilma Doesnt is now engaged to her non-showbiz partner Gerick Parin, and netizens could not help but notice that the comedienne will be “consistent” with her name once she gets married.

Doesnt received the “best birthday gift ever” after Parin proposed to her on her special day last Saturday, July 10. She gushed over her engagement as she showed a video of her fiance popping the question, through her Instagram page on the same day.

The actress appeared to be hosting an event at a resort when Parin came up to her and showed her the engagement ring, bringing her to tears before she could say yes to his proposal.

“The best birthday gift ever! Happy birthday to me!” she declared as she told others to “trust the process” and not to dwell too much on mistakes from the past.

Doesnt’s engagement drew laughs from netizens on Twitter as they made witty remarks and puns about her surname. They pointed out that the actress’ name could change to Wilma Doesnt Parin, which translates to “still Wilma Doesnt,” after she gets married.

Meanwhile, one @BelamiLukas said fate may be “playing” with Doesnt, as she will not be called “Wilma Does.”

“Pinaglalaruan ng tadhana si Wilma. Ayaw talaga siyang gawing ‘Does,” he quipped. (Fate is playing tricks with Wilma. It doesn’t want her to become a “Does.”)

The actress received congratulatory greetings as well from celebrity friends, including Regine Tolentino, Giselle Sanchez and Joey Mead, among others.

Doesnt, a single mom, has three children from past relationships. She first rose to fame in the 2000s as a comedienne and model. JB