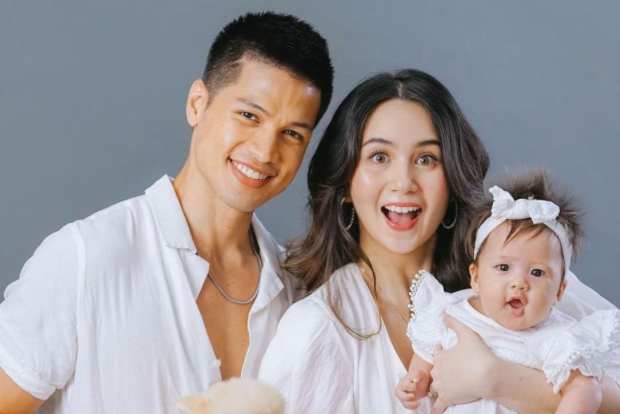 Actors Vin Abrenica and Sophie Albert managed to do their first family portrait shoot at home, as they celebrate their daughter Avianna’s third month.

“Sharing with you our shoot for this beautiful family! [Vin Abrenica, Sophie Albert] and Avianna. Shot at the comfort of their home,” Nice Print Photography stated as it showed several photos of the family on its Instagram page on Sunday, July 4.

The couple can be seen wearing all-white outfits while posing with their baby and their dog Ginger. Another set of photos also showed Ginger sitting next to a sleeping Avianna.

“I was so worried about Ginger before Avianna came. But Ginger has been so patient, protective and loving towards her little sister,” the actress stated, showing a photo of Avianna and Ginger on her Instagram page yesterday, July 5.

Albert admitted that she had been excited over her daughter’s first professional photo shoot, saying she had initially planned to have a newborn shoot for Avianna.

“We’ve been looking forward to having Avianna’s shoot. Unfortunately, we weren’t able to have her shoot when she was still a newborn,” she stated on her YouTube vlog with Abrenica also on Sunday. “Now, she’s turning three months old. She’s a little bit big for the newborn pictures but at least we will have professional photos for her.”

Albert added that she initially doubted if they would be able to get “decent shots” of her child and quipped that their photographers acted like “baby whisperers.”

“Happily collecting more and more wonderful memories with our precious little one. We are so grateful for all of you who share this journey with us!” she told fans.

Abrenica and Albert first met in the reality TV show “Artista Academy” back in 2012. They have been in a relationship for eight years before Abrenica proposed last year. The couple announced the birth of their daughter last March. JB