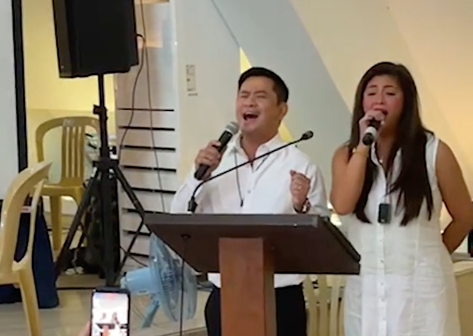 The celebrity couple sang the song as Aquino’s urn was being carried out of the Church of the Gesu in Ateneo de Manila University, as seen in his sister, actress Kris Aquino’s Instagram page on the same day.

Velasquez first sang the song during Noynoy’s bid for the presidency back in 2010, while Alcasid performed it during his inauguration.

Alcasid’s father served as the president and chief executive officer of the Philippine National Oil Development and Management Corp. during Noynoy’s term. Noynoy was also a groomsman during the couple’s wedding in 2010.

Alcasid said his relationship with the late Aquino was “pagkakaibigang tunay at tapat” (a friendship that is true and honest), as he stated on his Instagram page on Thursday, June 24.

“Napakaraming salu-salo na nauuwi sa kantahan sapagka’t napakahilig nya sa musika,” he recounted. (There were many gatherings that ended in singing because he loved music.)

He also recalled that Noynoy was one of the first people who mourned with him when his father passed away, noting that he was “fortunate” to be called Noynoy’s friend.

Noynoy, the only son of late former President Corazon Aquino and late former senator Benigno “Ninoy” Aquino Jr., served as the 15th President of the Philippines from 2010 to 2016. He died at the Capitol Medical Center in Quezon City on Thursday, June 24. JB