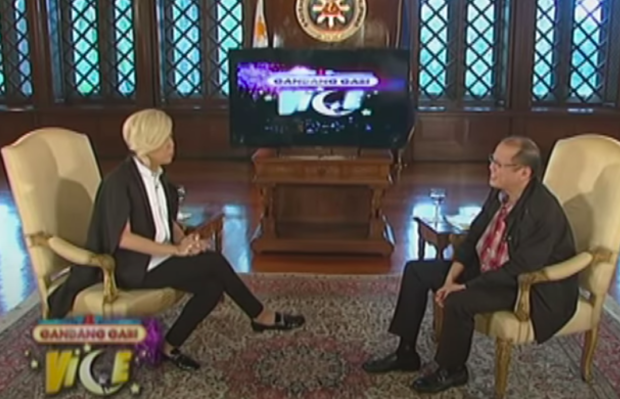 Comedian and television host Vice Ganda considers his interview with the late former President Benigno “Noynoy” Aquino III as one of his career highlights.

“I had the privilege to interview you for Gandang Gabi Vice during your term as President,” Vice Ganda posted on Instagram yesterday, June 24.

“That was one of the highlights of my career and also one of the best episodes of my program,” the comedian added.

Vice Ganda’s tribute comes as he and many others mourn the passing of Aquino yesterday due to renal disease secondary to diabetes.

Vice Ganda was able to interview Aquino, who was also known as PNoy, back in 2015, when he was still President.

“Thank you very much Sir Noy for the honor to personally meet you and have that once in a lifetime experience. As a Filipino I am grateful for your integrity,” Vice Ganda emphasized.

“May you rest in peace our [15th] President of the Philippines, Benigno Aquino III,” he added.

In their interview back then, Vice Ganda was able to joke around with the then-President and asked questions such as “What shampoo do you use?” at which Aquino laughed, yet still answered.

Amid the jokes, Vice Ganda also had a serious and heartwarming message for Aquino, whom the comedian thanked for being “the most decent Philippine president” he has ever seen.

(I want to thank you. I am serious now. Ever since I have been mature enough and had my eyes open, I can say that you are the most decent President of this country that I have ever experienced.)

“Magmula po noong bumoto ako, kayo lang po yata ‘yung binoto [kong] presidenteng hindi ko pinagsisihan (Ever since I was able to vote, you are the only president that I did not regret voting for),”Vice Ganda added.

Vice Ganda also admitted that Aquino had flaws and mistakes as a President, but he is still grateful for Aquino as he was sure that the then-President was not stealing from the country’s coffers.

Aquino, the only son of late former President Corazon C. Aquino and late former Sen. Benigno “Ninoy” Aquino Jr., served as the 15th President of the Republic of the Philippines from June 30, 2010, to June 30, 2016.  /ra