David Bowie painting bought for $4 sold at auction for nearly $90,000 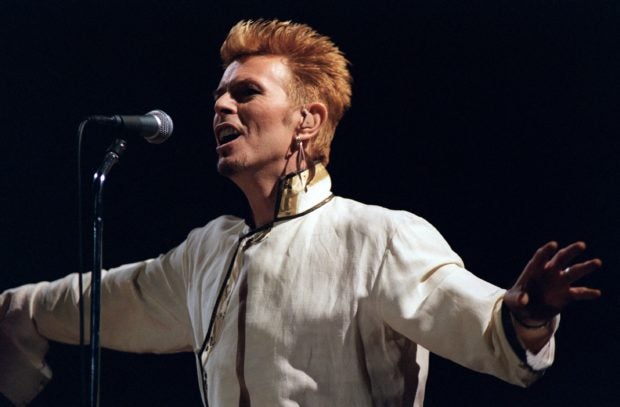 In this file photo taken on June 14, 1997, British singer David Bowie performs on stage, during a concert at the Parc des Princes, on the first day of the rock festival in Paris. Image: AFP/Jack Guez

A painting by British pop icon David Bowie recently discovered and purchased for about $4 at a Canadian store that resells donated goods, has been sold at auction in Toronto for nearly $90,000 (CAN$108,120), the auction house said Friday.

The sale price blew past auction house Cowley Abbot’s estimated $7,000 to $10,000 valuation of the diminutive artwork, which went to an American collector.

Auctioneer Rob Cowley said a dozen bidders vied for the computer and acrylic collage on canvas that is part of the so-called D Head series of portraits of the Ziggy Stardust rocker himself, his friends, and others that he painted between 1995 and 1997.

The 24-by-20-centimeter painting of a pale figure dressed in teal clothes, with teal and red hair on a crimson background, was originally sold through a website around 2001.

It somehow found itself two decades later at a donations store in South River, Ontario, 300 kilometers north of Toronto. There, an anonymous buyer paid $4 (CAN$5) for it.

“We were very excited to discover that the artwork was original and authentic,” Cowley had told AFP at the start of the two-week online auction. Bowie’s signed initials on the back, he said, were authenticated by a Bowie autographs expert.

The seller is “delighted and shocked” that the painting fetched such a high price, Cowley said on Friday.

Bowie attended art school and collected hundreds of artworks during his lifetime that were sold off for tens of millions of dollars after his death. But his own artworks, according to Cowley, rarely go on sale.