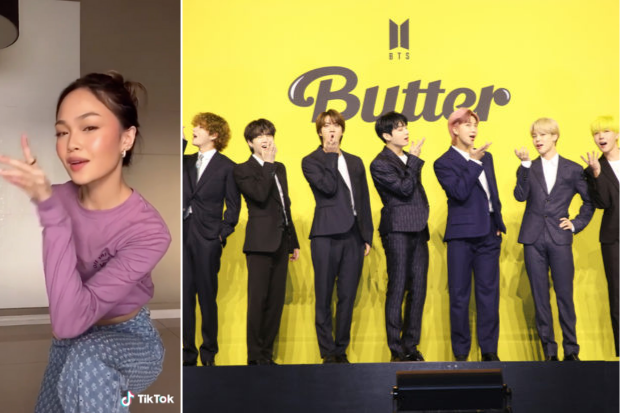 AC Bonifacio’s talent in dancing has been recognized overseas once again as the K-pop supergroup BTS “liked” her dance cover of their hit song.

Bonifacio’s “Butter” dance cover is among the “liked” videos of the official TikTok account of BTS, she shared with fans on Twitter on June 7.

“[Wait] lang po PROCESSING PA (Wait, I am still processing this),” the young dancer-singer stressed, followed by a bunch of crying and heart emoji.

The said tweet came with a screenshot of the liked videos section of BTS, which includes Bonifacio’s said TikTok video she uploaded on May 27.

“STREAM BUTTER OR ELSE @bts_official_bighit,” Bonifacio captioned her dance cover.

STREAM BUTTER OR ELSE @bts_official_bighit

“Butter” became the K-pop boy band’s fourth Billboard Hot 100 No. 1, making them the first act to achieve such a feat since The Jackson 5 in the ’70s—while also claiming five Guinness World Records.

Bonifacio, meanwhile, has also achieved several milestones for her talent. For one, she recently landed an appearance in hit CW drama “Riverdale” as Star Vixen to dance off against Madelaine Petsch’s Cheryl Blossom.

She also regularly posts dance videos online, with one even winning second place in K-pop group Blackpink’s “How You Like That” dance cover contest.