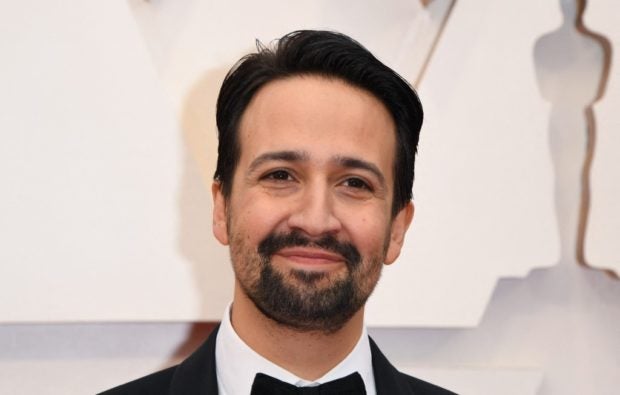 U.S. actor and singer Lin-Manuel Miranda arrives for the 92nd Oscars at the Dolby Theatre in Hollywood, California on Feb. 9, 2020. Image: AFP/Robyn Beck

Long before his mega smash hit “Hamilton,” Lin-Manuel Miranda dazzled Broadway with “In The Heights,” a Latin pop and salsa-inspired musical celebrating the New York immigrant community that raised him.

“It’s a big deal, and I think it’s the beginning of a Latin wave that I hope opens a lot more doors for more movies like this,” Mexican actor Melissa Barrera told AFP. “From the moment they started casting in the movie, I was like ‘Oh my gosh, because there aren’t many movies that give us this platform, I know everyone is going to audition for this.'”

Barrera, who rose to fame in Mexico’s “telenovela” soap operas, landed the key role of Vanessa, an aspiring designer hoping to trade the Washington Heights “barrio” at Manhattan’s northern tip for the chic fashion world of downtown.

Her love interest Usnavi (Anthony Ramos), a bodega owner, dreams of rebuilding his father’s beach bar in the Dominican Republic, while their Puerto Rican friend Nina (Leslie Grace) has “escaped” to Stanford University but pines for home.

Miranda, who is of Puerto Rican descent and has long advocated for his community in the entertainment world and beyond, wrote the first version of “In The Heights” as a young student at Wesleyan University.

It reached Broadway in 2008, where it earned 13 Tony nominations, and set its creator on the path to “Hamilton,” the wildly popular story of the first U.S. treasury secretary Alexander Hamilton and his fellow founding fathers, itself told through the lens of modern, multiethnic America.

But Barrera admitted it was “intimidating” to collaborate with the “Hamilton” creator on the follow-up of sorts to a global smash hit.

“The pressure comes along with ‘I want to do this right, I want to do the best that I can to do good by Jon and Lin… and the entire community.”

While 18.5% of the U.S. population is Hispanic, Latino actors accounted for just 5.4% of lead roles in Hollywood last year, according to UCLA’s “Hollywood Diversity Report.”

The film version of the tale is largely shot on the colorful streets of Washington Heights, blocks from where Miranda grew up.

In keeping with its recurrent theme of encroaching gentrification, location scouts had to studiously ignore the area’s Chipotle and Target chains, “recasting” several blocks with hand-painted signs and awnings to evoke a nostalgic, mom-and-pop shop feel.

Along with highlighting the food, music and traditions of Miranda’s youth, the film diverges from its stage predecessor by following Nina to protests supporting immigrant rights for the so-called “Dreamers.”

The film was shot and intended for release during Donald Trump’s presidency, at a time when the citizenship pathway for undocumented young people brought to the United States as children was under attack.

The pandemic forced a postponement to the movie’s release. Today, the passage of two immigration bills approved by the U.S. House of Representatives remains uncertain in the evenly divided Senate.

That feeling of self-doubt is “a universal feeling that we all feel, both in terms of representation and in terms of ‘Dreamers,'” she told AFP.

“They come with an aspiration… a dream.”

“In The Heights” opens in U.S. theaters and on HBO Max streaming from June 10. JB