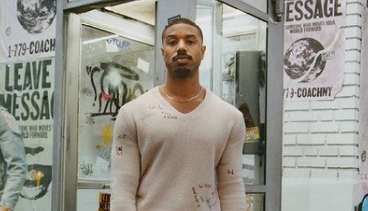 LONDON — “Creed” star Michael B. Jordan takes on another well-known lead role in the new movie adaptation of Tom Clancy’s 1993 thriller “Without Remorse.”

Titled “Tom Clancy’s Without Remorse,” the film tells the origin story of John Clark, one of the most popular characters in Clancy’s Jack Ryan universe.

Still known as John Kelly, the Navy SEAL returns home from a top secret mission and is getting ready for the arrival of his firstborn. His family idyll is disrupted when Russian soldiers storm his house and kill his pregnant wife.

As he seeks to avenge her assassination, Kelly comes upon an international conspiracy with the potential to blow up relations between the United States and Russia.

“I never played a character like this before,” Jordan told Reuters.

“Being able to jump into the Tom Clancy world and universe and be able to take a familiar character like John Kelly and give it a reboot, give it a fresh take, I was really interested and excited about it, being able to kind of do my own stunts and play a character that really didn’t have any limitations.”

A big screen adaptation of the novel had been in development since the 1990s, with several actors and filmmakers attached to the project over the years until Jordan, who also produced the movie, and Italian “Gomorrah” and “Romanzo Criminale” director Stefano Sollima, took it on.

“Sometimes you need fresh eyes to look at something,” said Jordan. “Stefano and the rest of the producers, we came together and we tried to bring a fresh take to it and make it as modern as we could and still keep that excitement.”

The result is a plot and setting that differ widely from the original novel.

“I don’t think we’ve seen a film based on a Tom Clancy novel that has two Black leads, a very multicultural cast. So that, I think is a major difference,” said actress Jodie Turner-Smith, who plays former Navy SEAL Karen Greer.

“The armed forces… are beginning to expand and there are women in these roles. And while there’s no female Navy SEALs, I think we wanted to reflect what’s happening in the world and how these things are changing and are pushing forwards.”