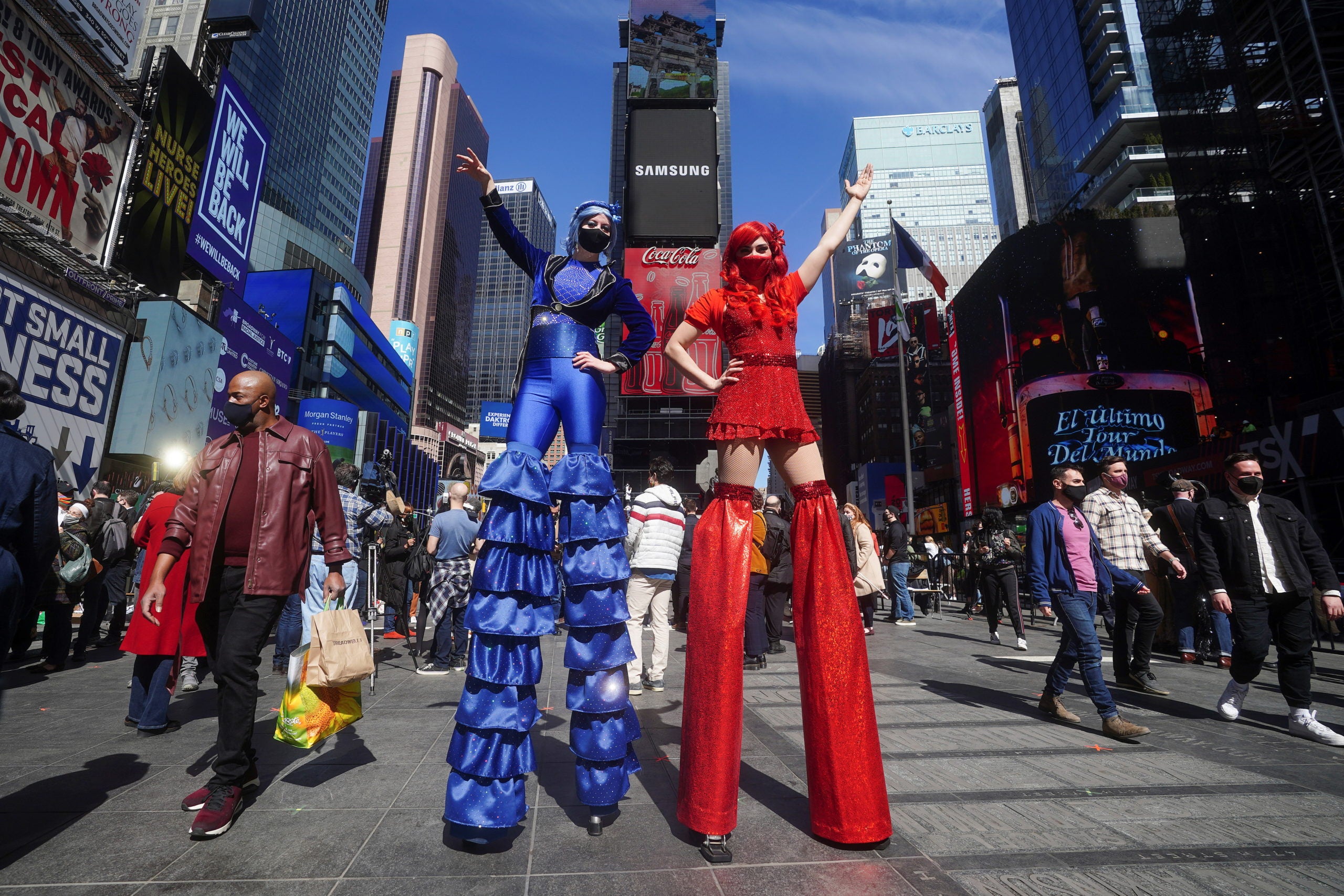 NEW YORK  – Theater performers reunited in New York City’s Times Square on Friday for a live pop-up show, vowing to return to the stage a year after Broadway drew its curtains due to the pandemic.

The special event featured appearances by singers, dancers and actors including Broadway stars Matthew Broderick, Chita Rivera and Tamara Tunie, who were happy to see friends and perform before an audience again.

A collection of actors performed classic theater hits and an original song, “We Will Be Back,” with costumes from Broadway shows “Ain’t Too Proud,” “Moulin Rouge! The Musical,” “Six,” “Phantom of the Opera,” and “Wicked” also on display.

For Tony award winner Nikki M. James it was a joyous reunion. “It’s amazing to see all my friends, to see that we’re thriving and to know that we’re feeling really hopeful about our ability to bring theater back to New York really, really soon, safely.”

Last March the pedestrian numbers in Times Square fell from 365,000 people per day to 35,000 almost overnight, said acting president and chief operating officer of the Times Square Alliance, Tom Harris. Now, he said, the numbers are back up to 100,000 over the last few days.

“Broadway closing down was a tangible symbol of the beginning of this pandemic and how serious it was,” Harris said. “The return of Broadway will also mark the end of the pandemic, and all that we have learned from the pandemic.”

While it is estimated that theaters will not reopen until September, organizers said the day provided an opportunity to safely and ceremoniously come together on Broadway. The live and in-person special performance represented arts and culture workers, unions, and individuals who comprise the Broadway community.

Broderick, who was in rehearsals for a new production when the shutdown happened, said he felt like “Rip Van Winkle … waking up from a year of sleep. It’s a very, very strange feeling.”

“I’m sure, for everybody, for audiences too, it’s going to take a while to get back.”

Read Next
J-Lo and A-Rod say they are ‘working through some things’ after reported split
EDITORS' PICK
Smart brings KCON:TACT especially 4U to subscribers from June 19 to 27
IATF recommends to Duterte face shield use in all enclosed areas
Red, yellow alerts in Luzon grid possible in coming weeks — DOE
Smart celebrates all kinds of ‘#SimplyLove’ for Pride Month
Leo Martinez pleads for senior citizens to be allowed to go out
He called bank: SJ Belangel aimed for backboard on game-winner vs Korea
MOST READ
DepEd chief Briones lying, teachers insist
Pacquiao ‘good choice’ as PDP-Laban standard bearer for 2022 – Koko Pimentel
Lakas-CMD to solidify alliance with Inday Sara’s HNP – Romualdez
Notes for next president: Huge debt, unemployment, hunger
Don't miss out on the latest news and information.