Wagner with half an orchestra? An English festival’s thorny COVID choices 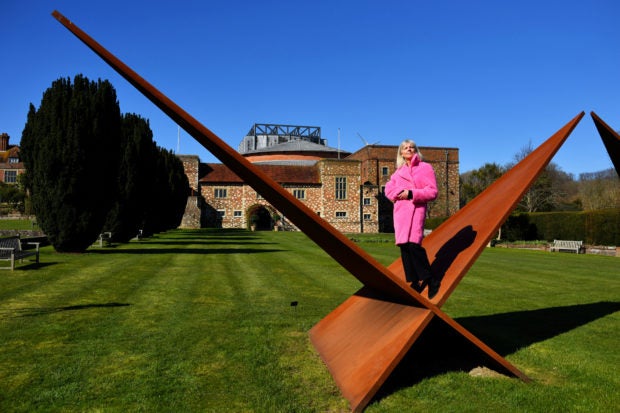 Glyndebourne’s managing director Sarah Hopwood, poses for a portrait on a sculpture “Triangles 5 (Bridge)” by Nicholas Hare, at the gardens of the famous opera house in Lewes, Britain March 9, 2021. Image: Reuters/Dylan Martinez

GLYNDEBOURNE, England — Can you do justice to Wagner with only 30 musicians in the orchestra pit because of social distancing?

That was one of countless questions facing the managers of Glyndebourne, an opera house set in idyllic countryside in southern England, as they planned the 2021 summer festival whilst under COVID-19 lockdown.

“The prospect of doing Wagner with an orchestra of only 30 really didn’t seem to make sense,” said Sarah Hopwood, managing director of Glyndebourne, recounting discussions about whether to go ahead with a production of “Tristan und Isolde”.

Instead, a bigger orchestra will sit on stage, which has more space than the pit, and the principal singers will stand in front with the chorus offstage. It will be different from the original production, Hopwood said, but fantastic.

Creative workarounds and contingency planning will be vital to the survival of arts venues, music festivals, cinemas and galleries around the world, as coronavirus lockdowns ease and guidelines change at short notice.

Some events, like Glastonbury music festival, have found the obstacles insurmountable and cancelled for two years running.

With plenty of outdoor space and a format that does not rely on huge crowds packed together, Glyndebourne may be one of the luckier ones. Yet even here the task of getting back up and running is an artistic and logistical headache.

Founded in 1934 by opera-loving landowner John Christie and his soprano wife Audrey Mildmay at their country mansion, the annual Glyndebourne festival is now a world-class, quintessentially English event.

Performances take place in a 1,200-seat opera house set in sprawling gardens with a picturesque lake. Women wear elegant gowns and men evening suits. During 90-minute intervals, the audience fans out into the grounds to picnic on the grass.

In 2020, the COVID-19 pandemic forced Glyndebourne to cancel the sold-out festival and refund tickets.

Ironically, the rural location, usually a logistical challenge, may have helped it survive, because of the legacy of an earlier crisis – a 2001 outbreak of the foot-and-mouth animal disease that devastated British farming.

With large swathes of the countryside locked down to prevent the spread of the disease, the festival was under threat. It ended up going ahead, but the crisis was a wake-up call, and Glyndebourne has focused since on building a cash cushion.

That was invaluable to get through 2020 and allows plans to be made for 2021, which Hopwood expects to be loss-making.

“We are going to be drawing on reserves to make this happen,” she said. “It’s about people. It’s about keeping our staff employed, it’s about providing work for freelancers, and it’s about engaging with our audiences.”

For now, 600 tickets per performance, or 50% of capacity, will go on sale to allow for a socially distanced audience. That represents a reduction in gross potential box office of £11 million ($15 million or P743 million).

Hopwood said more tickets would be released for sale later if government rules allowed. The festival runs from May 20 to Aug. 29.

Rehearsals are a particular challenge. In normal years, up to five companies, or about 1,000 people, would be on site at the same time in the run-up to the festival. Performers coming from abroad would stay in local accommodation.

This year, rehearsals have to be spaced out and reimagined, while performers based in other countries face self-isolation and multiple COVID-19 tests. Even the making and handling of sets and props require careful thought.

“There will be bumps along the way, and we will be ready to adapt as we have to,” said Hopwood.

As well as Wagner, the 2021 repertoire includes Mozart’s “Cosi fan tutte,” an old favorite that can be done in a COVID-safe way, and three new productions of operas by Janacek, Rossini and Verdi.

Social distancing will be in force during rehearsals, but may have loosened by the time performances take place, so directors and performers are preparing for several scenarios, Hopwood said.

“We may have productions going from a fully socially distanced rehearsal room onto stage where suddenly people are allowed to embrace.” JB