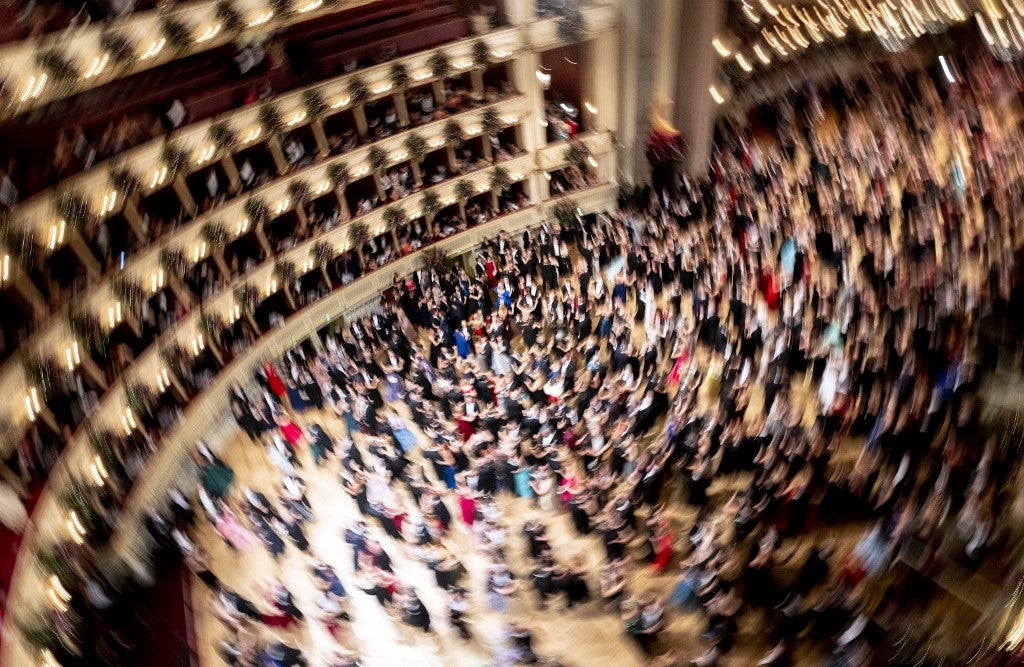 In this file photo taken on February 20, 2020 People dance during the opening ceremony at the Vienna State Opera during the annual Opera Ball in Vienna, Austria. Vienna, a city temple of culture turned ghost town: the traditional New Year’s concert will take place, but without an audience. Photo by JOE KLAMAR / AFP

VIENNA — While a virus-laden silence has descended over what is normally a busy period of concerts and balls in the Austrian capital Vienna, the city’s world famous New Year Concert is at least providing one saving grace — albeit to an empty hall.

The city’s concert halls were among the first in Europe to re-open in June, in the wake of the first wave lockdown, as Vienna tried to preserve its reputation as one of the world’s preeminent centers of classical music.

But as the virus took hold again in the autumn, fresh restrictions soon followed.

Music venues again had to close in November, in a city that normally boasts some 15,000 concerts and musical events annually.

But one show will go on, no doubt charged with more symbolism this year.

“If we cancel the New Year’s Concert, that would be such a horrible sign to the entire world,” Vienna Philharmonic chairman Daniel Froschauer told AFP at the end of October when rising infection numbers were forcing Vienna’s cultural world to prepare for a new phase of restrictions.

In December, even once venues had been forced to close, Froschauer said at a press conference that it would be “impossible” not to go ahead — and his view has prevailed.

The first one of the prestigious concerts took place at a much darker moment in Austrian history, on New Year’s Eve 1939.

Since then it has built up a following which sees it broadcast in more than 90 countries to more than 50 million people.

Normally the lucky few who get to go in person at Vienna’s Musikverein are chosen in a draw.

This year though the musicians, conducted by Italian Riccardo Muti, will perform to an empty hall.

But to break the silence, the ORF public broadcaster will play in applause from 7,000 music lovers watching from home.

If, as Froschauer says, the Philharmonic is to Austria as “soccer is to England”, then it’s only fitting that the New Year’s Concert should be a rare survivor of lockdown closures.

But the wider shutdown of cultural life has been catastrophic for many artists. Since spring, Froschauer has been trying to raise their plight, even taking their case to Chancellor Sebastian Kurz.

Froschauer insists performances are safe, arguing that in the several months in which restrictions were relaxed, “we never once had a large cluster” of infection from performances.

“We do PCR tests in order to play and we wear masks” until playing, he says. “Our audience is very disciplined.”

While the New Year’s Day concert may be some comfort for music lovers, those hoping to dance during Vienna’s legendary ball season will be disappointed.

This season there will be none — in a city that normally hosts around 450 of them between November and February, dedicated to groups as diverse as chimney sweeps, cafe owners, bodybuilders and florists.

The tradition goes back to the 18th century, when the tradition of Habsburg court balls being reserved to the aristocracy ended.

For Thomas Schaefer-Elmayer, the 74-year-old head of a dancing school founded by his grandfather 100 years ago, the current situation is “extremely sad”.

While normally there would be around 100 students twirling on the gleaming parquet floor of his school, this year it is empty.

“It is the first time that we are totally helpless… online is not the same,” says Schaefer-Elmayer, who has acted as master of ceremonies at some of Vienna’s most stylish balls.

The current situation is a “disaster” for the 20 or so dancing schools in Vienna.

In addition, the ball season normally creates work for thousands of hairdressers, florists, hoteliers, tailors and taxi drivers, among others.

In all, the city has lost 150 million euros in revenue this year, says Norbert Kettner, director of Vienna’s tourist office.

But it is also a blow to the Viennese carnival season, says Kettner.

For while the balls are an expression of the city’s centuries-old traditions, they have also been embraced and adapted by younger generations and Kettner assures that they can be “very wild, lively”.

Kettner says the New Year’s Concert will be an opportunity for the city to send out a “musical message” — in the hope of attracting more visitors when the pandemic is finally defeated.

Read Next
Momoland’s Nancy praises ‘Fan Girl’ star Charlie Dizon over MMFF win: ‘You are amazing’
EDITORS' PICK
EDITORIAL: To a bike-friendly future
The Best Tech Gifts For The 2022 Holidays
Pagasa: Warm, sunny Sunday in most parts of PH
House energy committee chair Arroyo bats for cheap electricity
Is it safe to talk politics again at family gatherings? ‘The Reconciliation Dinner’ shows us what that’s like
vivo’s coming to town to grant wishes with more holiday promos
MOST READ
LOOK: Vhong Navarro transferred to BJMP detention facility in Taguig
The Elephant Man in the Senate
Posh village as ‘shabu’ haven
LOOK: Zanjoe Marudo bonds with Ria Atayde, her family
Don't miss out on the latest news and information.