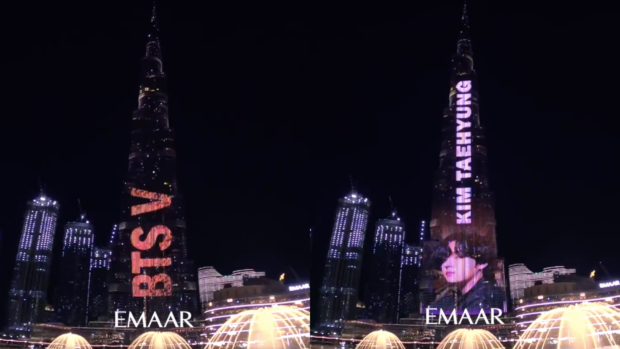 “#BurjKhalifa celebrates the birthday of V, the South Korean singer from the popular band BTS!” it said on its Twitter page alongside a nearly two-minute video of the show.

The skyscraper, which is known as the world’s tallest building, also displayed various clips of V throughout the short tribute. In between the montage of V, the greetings “Happy V Day” and “We Purple U” appeared as well.

Aside from recognizing him as a singer, the Burj Khalifa also highlighted his talents as a dancer, producer and actor. During the show, V’s solo 2019 song called “Winter Bear” played in the background.

The grand gesture was organized by a certain China-based fan group called China Baidu Vbar. The supporters also shared the short tribute on its own profile, asking if their “cute Taehyung” had seen their surprise.

“Happy Birthday to you, our precious baby bear,” it added. “Thank you everyone and thanks for Taehyung coming into our lives. Life is nothing without you.”

Hey our cute Taehyung did you see it💜
Happy Birthday to you, our precious baby bear🧸
Thank you everyone and thanks for Taehyung coming into our lives.
Life is nothing without you.@BTS_twt @bts_bighit #emaar #burjkhalifa#HAPPYVDAY#HappyTaehyungDay#TaehyungOnBurjKhalifa https://t.co/dKgwgGIlry

Prior to the Burj Khalifa, the group also staged other large-scale tributes for V in cities such as London, Seoul and Daegu, among others.  /ra