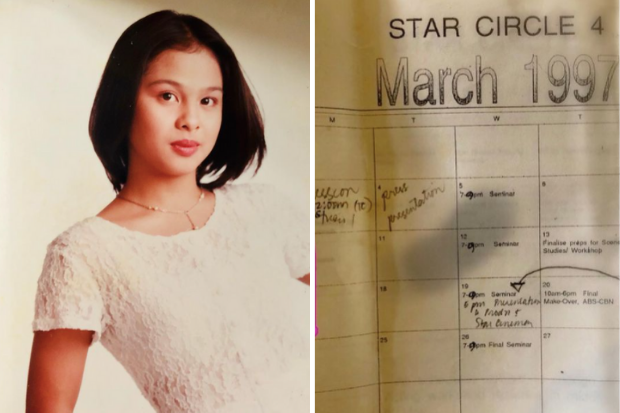 Nikki Valdez took a trip down memory lane as she celebrated her 24th year in the showbiz industry, her career having started with ABS-CBN’s “Star Circle Quest.”

To mark the special day, the actress-singer shared with fans her first-ever “Star Circle” 1997 calendar that shows her schedule as a young star back then, including press conferences and what appears to be an “ASAP” appearance.

“Today, another milestone happens in my career as I celebrate 24 years in showbizness!!!! Wow wow wow, 24 years!!!” Valdez posted on Instagram on March 9.

(This picture was part of the “Star Circle” Batch 4’s press kit launch. Social media was not around back then, so everything was hard copy.)

(It is so nice to reminisce on all the joys, struggles and sacrifices before I can celebrate this day — my almost-every-day commute riding the bus, jeep and taxi to get to ABS-CBN for training, going to Hotel Rembrandt for workshops and to other locations for taping and shooting because I did not have a car back then.)

As she looked back at the joys and struggles of her early days as an entertainer, Valdez also expressed her gratitude to all those who had helped her.

(To the people who lent me so many clothes for my pictorials and to our longtime friend who had a parlor, who gave me hot oil treatments so that I would look beautiful at the launching of our pictorial, as sponsors were not common back then.)

“Napakaramiiiiing alaala na habambuhay ko dadalhin sa puso ko hangga’t ako’y nabubuhay at may trabaho (There are so many memories that I will forever hold in my heart as long as I am alive and have work),” she stressed.

Despite her success, Valdez disclosed that being an actress was never her dream as a child, as seen in an Instagram post yesterday, March 10.

“I was always insecure, intimidated and had fear of rejection but fate went the other direction and God had the best plans for me. Here I am now [24] years later… Was it easy? No. There are still some struggles to this day. Was it worth it? Definitely! I wouldn’t have it any other way,” she stressed.

“I am beyond blessed to have a job that continues to sustain me and my family and a company that has continued to love and take care of me and people who have always been there no matter what. I am in my happy place and have no plans of going elsewhere,” she added.

Among Valdez’s batchmates from “Star Circle” in 1997 were Jericho Rosales, Kristine Hermosa and Dominic Ochoa.

Also among the “Star Circle” Batch 4 stars was Dimples Romana, who also took to social media on March 9 to celebrate her likewise 24th year in show biz.  /ra

LOOK: Dimples Romana’s throwback on 12-year-old self as she marks 24th year in showbiz

Read Next
Julia Barretto says she doesn’t want to judge her haters: ‘I know what it’s like to be judged’
EDITORS' PICK
Concepcion: Consider vaccine passes once herd immunity reached in NCR Plus
Patients evacuated as fire hits PGH
Tired of your Wi-Fi signal problems at home? Here’s a solution!
Must-know scams to avoid when buying cars
Average new COVID-19 cases daily in NCR down 30%
POVA x Mobile Legends Bang Bang: A partnership that’s built to win
MOST READ
Patients evacuated as fire hits PGH
Janet Jackson’s Rhythm Nation jacket sells for more than $81,000
Mikey Garcia ‘not getting hopes up’ as Pacquiao fight yet finalized
Only China to blame for PH loss of Panatag, says ex-DFA chief
Follow @IBiongINQ on Twitter
Don't miss out on the latest news and information.