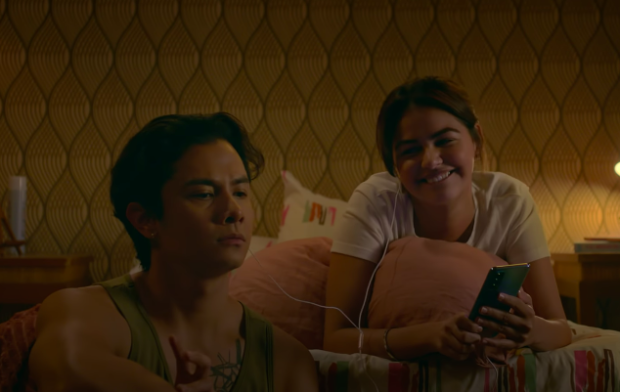 JC Santos (left) as Cabs and Janine Gutierrez as Len in “Dito at Doon” (Image: screengrab from YouTube/TBA Studios)

JC Santos and Janine Gutierrez struggle in their lockdown romance in the recently released trailer of JP Habac’s “Dito at Doon” (Here and There), which is currently participating in the Osaka Asian Film Festival.

Len (Gutierrez) and Cabs (Santos), two friends who apparently often annoy each other, develop a romantic relationship amid the pandemic, as seen in the official trailer of “Dito at Doon” released by TBA on YouTube last Thursday, March 4.

While they initially find each other intolerable, especially on social media, Len and Cabs slowly get on each other’s good side as they go through the lockdown with video calls and chats.

Meanwhile, Ben&Ben’s “Nakikinig Ka ba sa Akin?” accompanies the bantering and the flirting of the two main characters throughout the trailer.

Toward the end, the trailer gives a glimpse of the conflict Len and Cabs will face as it poses the question, “Will their love survive once it’s taken offline?”

The trailer’s release comes as the Habac-directed film is currently participating under the New Action! Southeast Asia Section of the said film fest and is set to screen on March 9 and 13. “Dito at Doon” will, meanwhile, premiere in the Philippines on March 17.  /ra