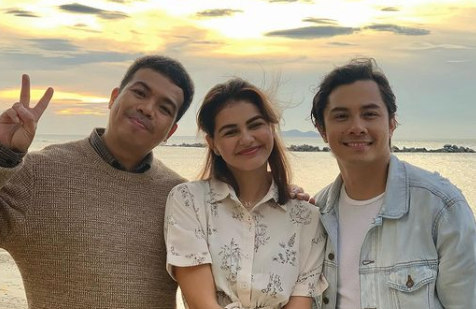 Actor JC Santos only had praises for co-star Janine Gutierrez as they capped off their work for film “Dito at Doon,” directed by JP Habac.

Santos was full of gratitude as he thanked TBA Studios and Habac for choosing him to join the project and hoped to still be involved with the “I’m Drunk, I Love You” director’s future films.

As for Gutierrez, Santos bared she was one of his most favorite actresses.

“Ang hirap ng pelikula natin na ‘to pero naging magaan ang lahat ng proseso dahil ikaw ang kaeksena ko (This film of ours was difficult, but the process became easy because I worked alongside you),” Santos said via Instagram on Dec. 21.

Santos praised Gutierrez’s openness and generosity and likewise hoped to work with her again in the future, as this is only their second time working together. He also said that she deserved the Best Actress awards she recently received from Gawad Urian and FAMAS.

(I hope to work with you on many more great films, regardless if it’s easy or difficult. Break a leg on your next projects. Until the next time we tell stories. Good work, sister).

Gutierrez also commended Santos as she said, in a comment, that she has learned so much from him.

“Tama ang matagal ko nang wish na makapareha ka sa pelikula. Iba ka (I was right in my longtime wish to work with you on a film. You are something else)!!!” said Gutierrez.

“Had the best time with you and I’m a fan forever,” she added.

Not much is known about the plot of “Dito at Doon,” but TBA Studios warned fans on Twitter last Dec. 8 to “ready your hearts” as shooting for the film began.  /ra