Barbie Imperial got a late—but grand—Valentine’s Day surprise from boyfriend Diego Loyzaga, who had her room filled with red flowers for the special day.

The actress gushed at the stunning arrangement of flowers strung from the ceiling and the floor lit with candles that greeted her.

“Thank you for your endless efforts,” she wrote on Instagram yesterday, Feb. 16. “You were still able to do this kahit hindi tayo magkasama (even if we could not be together) cuz you have work. Grabe ka (You’re amazing) you always find a way to make me happy.”

“Thank you for always making me happy and feel loved. Any day feels like Valentine’s day with you,” she added.

Loyzaga apologized for its being “delayed and not in person” in the comments section. He promised to make it up to her when they can be together again. “Miss you, love,” he wrote.

Many were overjoyed for the couple, among them his half-sisters Chesca and Sam Montano. Just a month ago, he surprised Imperial by decorating her room with polaroids of them; one of them read, “My sisters like you.”

Of course, there were skeptics, too, who saw past the romance. Among them was Imperial’s friend, actress Chienna Filomeno. Imperial shared Filomeno’s message to her via Instagram Stories where she asked, “So sino maglilinis (who will clean this up)?” 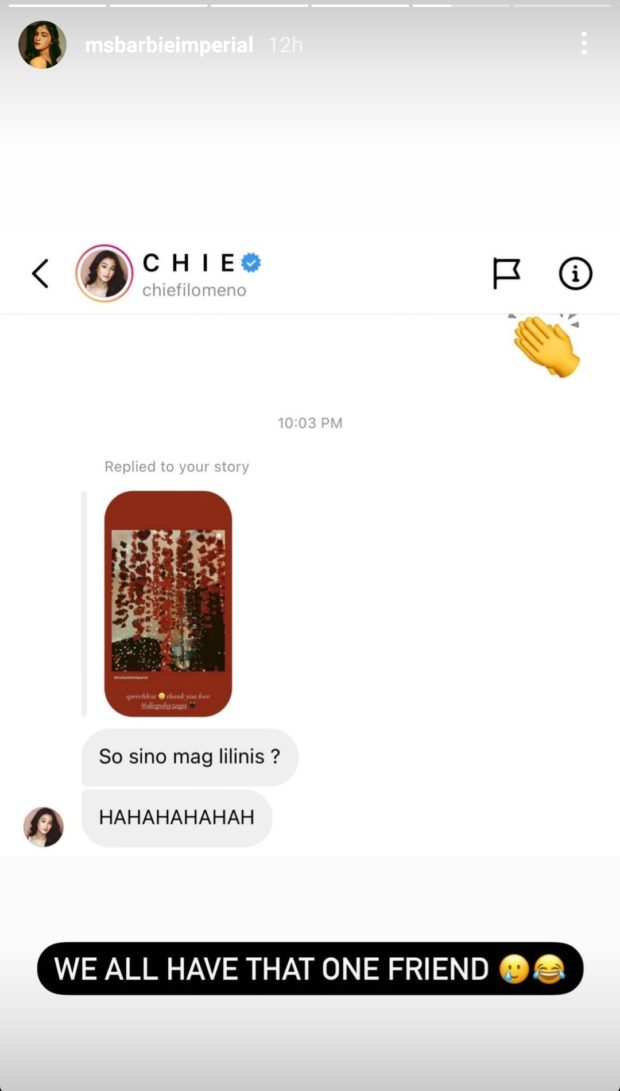 Imperial gave no clue how exactly the whole arrangement would be taken down, stating instead, “We all have that one friend.”

Loyzaga and Imperial confirmed their relationship on New Year’s Day. The actress said that she did not expect they would become a couple after years of being friends.

Though over-the-top gestures of love still bring awe, more people have become critical of what it means for the environment. For instance, when former PBA player Ben Fernandez used dozens of heart-shaped balloons to surprise his girlfriend, social media users expressed concern about the plastic waste that would be produced.  /ra