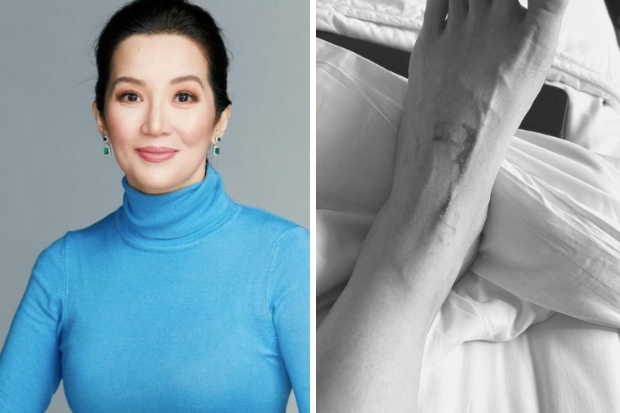 The Queen of All Media suffered from an accident that was a little too close to sending her to the emergency room just before her 50th birthday tomorrow, Feb. 14.

Kris Aquino sustained a foot injury that she believes was caused by an uncut rose quartz she used in the bathtub last Sunday, Feb. 7.

Aquino noted that she used the quartz because it was supposed to help heal her skin, “dagdagan na natin ang masamang dulot ng too much googling, my nurse was also playing the Tibetan singing bowl para daw mawala ang lahat ng negativity so [I’ll] ‘heal faster.”

(And let us add the dangers of too much googling, my nurse was also playing the Tibetan singing bowl supposedly to get rid of all the negativity so I would “heal” faster.)

“So [I] got out after 15 minutes, nag shampoo (used shampoo), used a mild shower foaming cleanser, then got out to dry myself — oh my, my left foot was covered in blood,” Aquino said.

“[I] swear, [I] didn’t feel kung nagasgas or tumama sa rose quartz, [I] also didn’t notice anything was wrong when [I] was in the shower. We showed my doctor [and I] missed daw the vein by less than 1/2 an inch or else nasa ER na ko. This pic was already after nalinis yung cuts with CUTASEPT but before the FUCIDIN,” Aquino explained.

(I swear, I didn’t feel if it got scratched or hit by therose quartz, I also didn’t notice anything was wrong when I was in the shower. We showed my doctor and he said I just missed a vein by less than half an inch or else I would have been in the ER already. This picture was already after the cuts were cleaned with cutacept, but before the fucidin.)

Aquino then shared the moral of the story: “awat na muna sa rose quartz & tigilan ko na muna yung mga Tibetan singing bowls… Start na ng Year of the Ox — here’s to a healthier year for all of us.”

(Let us take a break from rose quartz and I should stop listening to Tibetan singing bowls for now… It is the start of the Year of the Ox — here’s to a healthier year for all of us.)

In the same post, Aquino disclosed that she had her regular blood tests done to ensure that she is healthy before she and her family move to her beach house in the province.  /ra