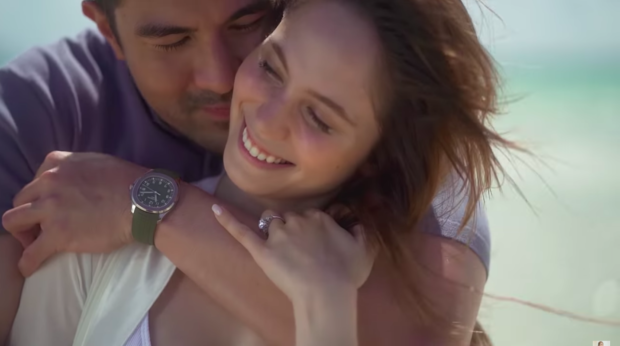 After showing the public romantic photos from their prenup shoot, Luis Manzano and Jessy Mendiola now have an accompanying video to remember the day of their proposal.

Mendiola previously revealed in a vlog last December that the shoot in Amanpulo, Palawan, was a re-creation of her fiance’s private proposal last October.

The video, set to a HRVY cover of “Baby I Love Your Way” shows the photogenic couple in stunning scenes on the white-sand beach and against a dreamy sunset. It was released on Sunday, Jan. 24, on Mendiola’s YouTube channel.

It also highlights the diamond ring from Manzano, which Mendiola had reset with a second jeweler and which she designed herself.

The ring had been the subject of some controversy after the first jeweler claimed that they were not given proper credit for the ring. This led Mendiola to make a tearful confession about learning of the proposal from the said jeweler and feeling like the “excitement” of the proposal was taken from her.

The photo shoot in Amanpulo was apparently a way to enjoy their engagement, since they did not have the typical surprise proposal.

The couple got engaged after being in a relationship for four years. /ra

Read Next
Enchong’s ‘practical’ formula for success
EDITORS' PICK
High inflation: Your P1 is now worth only 87 centavos
UK’s Boris Johnson will resign, BBC reports
High-risk pregnancy: Reducing your risk is in your hands
Geek out at TOYCON 2022 powered by Smart Signature
House energy committee chair Arroyo bats for cheap electricity
Unemployment rate up to 6% in May
MOST READ
Suspect in grisly killing of missing woman in Bulacan arrested
Kim Atienza’s daughter flaunts bikini body in response to critics of her ‘revealing photos’
Japanese artist who created ‘Yu-Gi-Oh!’ found dead in the sea
FDA probes popular Filipino noodle brand for ‘high level of ethylene oxide’
Follow @NGunoINQ on Twitter
Don't miss out on the latest news and information.