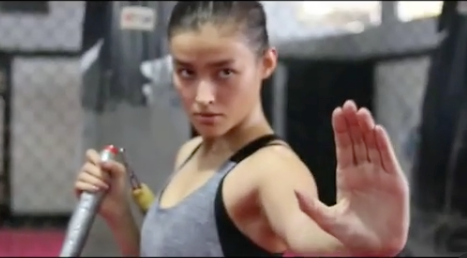 Liza Soberano looked every inch a superhero in a video montage recently shared by mixed martial arts fighter Erwin Tagle, who was involved in the stunt team that trained Soberano when she was still onboard the “Darna” movie project.

Tagle shared the video via Instagram on Nov. 29, where he tagged the actress. The video showed a montage of Soberano’s training days, from expertly wielding nunchucks, showcasing her Muay Thai skills and taking on four men in a played-out beatdown, among others.

Actor Paolo Paraiso was one of those who commended Soberano. In a comment, he said, “Iba talaga tingin. Galing.”

Another commenter, echoing the overall feedback from most fans who saw the video, also praised Tagle and hoped Soberano would be given an action movie in the future.

(That was awesome. You teach well. I hope she gets to be assigned to do an action movie. It’s such a waste not to show talent like this.)

The video montage was also shared by Kapamilya Online World’s Twitter page on Sunday, stating, “A Darna that we never had.” The tweet has since garnered over 21,000 likes and around 2,700 retweets, as of writing.

The post no doubt sent fans of Soberano in a clamor, with some expressing their disappointment over the seemingly lost opportunity. Others likewise hoped for the actress to star in an action movie one day.

Despite Soberano’s exit from the project, much hope still surrounded the making of “Darna” under the direction of Jerrold Tarog.

But COVID-19 struck and in August, an unidentified Star Cinema source claimed that the “Darna” movie had been scrapped due to the pandemic and the big budget required.

The saying “never say never,” however, indeed rings true. Months after the supposed cancellation of the project, Bandera Inquirer, through a source, reported on Nov. 24 that the flight of Darna will still be pushing through in 2021— except it would be a television series instead of a movie.

De Leon remains as Darna, as per the report, but it was not stated if Tarog will still be directing the series. JB