‘Nun of Your Business’: Unveiling a Croatian love story 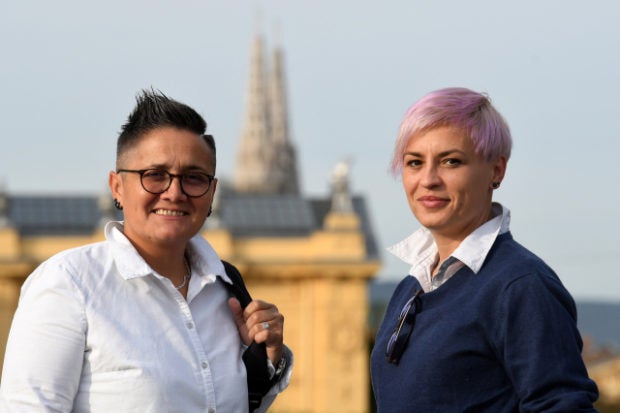 Marita was a young nun on a Croatian island when she first met Fani, a fellow sister who would become her great love.

“I simply followed my heart,” the 36-year-old says of their story — the subject of a new, bold documentary in the staunchly Catholic country, where LGBTQ rights are limited.

Titled “Nun of Your Business,” the film premiered at the ZagrebDox international documentary film festival over the weekend, scooping up an audience award.

“It tells the story of an unexpected and unusual love, but my directorial focus was more on the issue of personal freedom,” Croatian director Ivana Marinic Kragic told AFP.

The two women “found strength to eventually fight for their love, which is not generally accepted in our society, and they made a U-turn in their lives,” she said.

With the help of actors to reconstruct some scenes, the documentary tracks the lives of the women as they grapple with their sexuality and their faith.

Both hail from small, conservative communities in Croatia, where the Church wields a strong influence.

While tolerance for the LGBTQ community has grown in Croatia in recent years, religious groups have led the charge to keep gay marriage outlawed and restrict legislation on matters like fostering and adoption.

Director Kragic said her hope for the film was to create empathy, not controversy, over the couple’s story.

Driven by a desire to help the needy, Marita Radovanovic was 18 when she joined a convent on her native island of Korcula.

She first met Fanika Feric, called Fani, in Zagreb during a training seminar for young nuns before taking their vows.

It wasn’t until years later, after Marita had already quit her convent but Fani remained, that a romance bloomed.

“I used to idealize (the Church) but eventually I realized I didn’t fit into that framework,” Marita said of her disillusionment with the monastery, where she discovered petty drama and conflict was no different from the outside world.

“The motto of my order was ‘Veritas’ (truth in Latin). Eventually I decided to be honest to myself and to God who is love,” she added.

Marita had first become aware of her sexual orientation inside the nunnery where she had a relationship with another woman that became abusive, marked by stalking and jealousy.

“For months, tears were constantly rolling down my face while I was praying,” the 36-year-old, who sports short hair dyed light purple, told AFP.

Fani, who joined her convent in eastern Croatia at the age of 23 after working in a factory, had always known she was gay, but was afraid to come out in her hometown.

“I was not thinking about where I was heading… in a convent there are a lot of women,” the 40-year-old said with a smile.

“For Catholics homosexuality is a major sin. I was praying to God to heal me from my ‘illness’.”

‘Honest to God and myself’

The two women started chatting regularly after Marita had renounced her nun’s habit and was studying in the coastal town of Split.

“I was thinking more about her than about the Gospel,” joked Fani, a nun in Zagreb at the time.

After a fateful visit from Marita in 2010, Fani asked for a few days of leave to reconsider her path.

“As a young girl, when I saw a shooting star I always thought: ‘God please send me a person like me to meet.’ Now she was here, so I quit the convent”.

The couple later moved to Zagreb.

“It’s easier in a big city, where no one knows you, no one judges you, no one points a finger at you, people accepted us as we are,” said Fani.

After several years, they returned to Marita’s home on Korcula, finding acceptance with her family. Fani’s parents are no longer alive.

It took nearly seven years to make the movie after the women first met director Kragic.

The couple had to find security in their new lives, and also establish trust with Kragic before they felt ready to unveil their story to the public.

Both have held on to their faith, separating it from the institution of the Church. Clergy have not yet reacted to the film.

Their hope is to encourage others to follow their hearts.

“That’s what I did, both in the convent when I realized it was not my path, and regarding Fani,” said Marita. NVG

‘Pose’ creator working on a new series on LGBTQ rights