WATCH: Arci Muñoz names plot of land after Jimin of BTS for his birthday 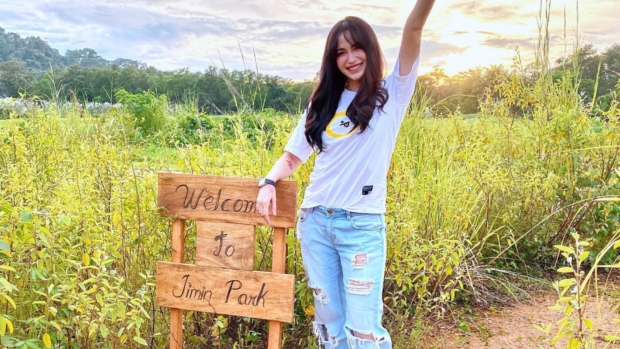 Arci Muñoz named one of her properties after BTS member Jimin. Image: Instagram/@ramonathornes

K-pop fanatic Arci Muñoz celebrated the birthday of BTS member Jimin by naming a plot of land that she owns after him. The K-pop artist turned 25 years old on Oct. 13.

The actress revealed her gift to Jimin through a vlog post on her YouTube page yesterday, Oct. 14. After arriving at the property, she made her way to its entrance while carrying a wooden sign.

Muñoz then placed the sign that said “Welcome To Jimin Park” on a nearby spot and joked, “So you now own this piece of land, Park Jimin.”

Muñoz also marked the occasion by wearing a shirt that featured a cartoon puppy named Chimmy, which Jimin created.

After placing the sign, she gave a quick tour of the property which is near a river. She also showed some of the trees she planted during her birthday celebration last January.

As an avid fan of the whole K-pop group, Muñoz named some of the trees after the members and the characters they created which are collectively known as BT21.

Before the COVID-19 pandemic postponed live concerts across the globe, Muñoz attended the group’s performances in Japan, South Korea and the United States. JB