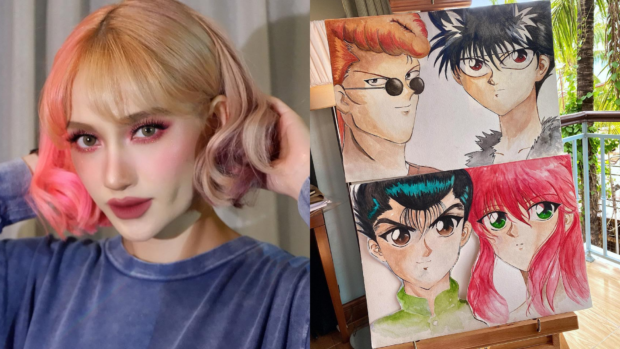 Arci Muñoz and her artwork of the protagonists of the 1990s anime series “Ghost Fighter”. Images: Facebook/Arci Muñoz

Arci Muñoz looked back on her childhood by creating portraits of the main characters of the hit 1990s anime “Yu Yu Hakusho: Ghost Files”, popularly known as “Ghost Fighter” in the Philippines.

(I just felt the urge to draw again… it feels so good to reminisce the memories of my childhood.)

Muñoz made portraits of the show’s four protagonists. She drew Alfred and Vincent on one sheet of paper while she sketched Eugene beside Dennis on another.

“[Ito] ang namiss ng mga kabataan ngayon (This is what today’s youth missed)!” she said while noting that the anime is now available on Netflix in the Philippines.

“[K]aya [k]ung ni reigun mo sa pwet kapatid o kaibigan mo (So if you did the reigun to the butt of your sibling or friend) for sure ya had an amazing childhood!!” the actress added.

The show follows Eugene (Yusuke Urameshi in Japanese) as he serves as a Spirit Detective after dying while attempting to save a child’s life. Popular among Filipino 1990s kids, “Ghost Fighter” premiered on Philippine television via IBC-13 in the mid-’90s before GMA Network acquired the rights for the show and aired it in 1999.

The series is based on a Japanese manga of the same name, which was written by Yoshihiro Togashi in 1990 for the Weekly Shonen Jump magazine. Along with “Ghost Fighter”, Togashi also created another popular manga called “Hunter x Hunter”. JB