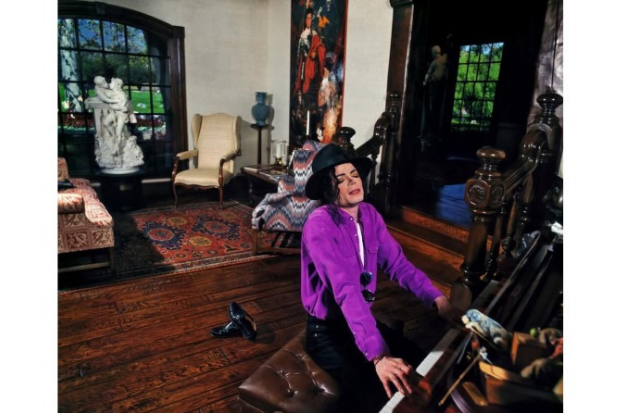 Guernsey’s Auctions is holding an online auction called ‘Treasures once owned by Michael Jackson by Guernsey’s’ on Oct. 23. Image: courtesy of Guernsey’s

Singer, songwriter, producer… and art collector. A series of items once owned by the King of Pop, Michael Jackson, are set to go under the hammer, October 23, in an online sale held by the Guernsey’s auction house. The sale includes bronze sculptures, malachite candelabras and the Jackson 5’s first contract with Steeltown Records, signed by Joseph Jackson.

The “Treasures Once Owned by Michael Jackson” sale offers fans and art enthusiasts a collection of 80 lots, including artworks that once adorned Neverland, the late singer’s vast Californian ranch and private theme park.

Items in the sale include a bronze statue of Peter Pan and a wooden model of Captain Hook’s ship, both estimated to fetch US$30,000 to $40,000. The latter was gifted to Michael Jackson by the actress Elizabeth Taylor.

Art enthusiasts will also be able to bid for a rare bronze cast of “Gloria Victis” by the French sculptor and painter, Antonin Mercié, estimated to fetch US$75,000 to $85,000. Other casts of the 1874 statue are currently in collections held by New York’s Metropolitan Museum of Art and the National Gallery of Art in Washington DC.

The “Treasures Once Owned by Michael Jackson” auction also includes collector’s items and memorabilia from the King of Pop’s vast musical career, such as the first contract between the Jackson 5 band and the Steeltown Records label. This historic document, signed by Joe Jackson, is expected to fetch US$50,000 to $100,000. Similarly, an acetate disc of the Jackson 5’s first singles could sell for US$10,000 to $20,000.

According to Artnet News, certain lots in the auction were consigned by Richard LaPointe, who acquired them following a lengthy legal battle with Julien’s Auctions and the Jackson estate. The collector, based in Quebec, Canada, had bid on various objects belonging to Michael Jackson that Julien’s Auctions planned to sell between April 22 and 25, 2009.

This major sale — which could have fetched between $15 and 20 million at Julien’s Auctions — was ultimately canceled at the last minute on the request of Michael Jackson’s production company, MJJ Productions.

“Now, more than a decade later, the collector has decided to share Michael’s cherished items with the world
and give fans the chance to own a piece of the King of Pop’s legacy,” said Guernsey’s Auctions in a press release. NVG

Read Next
‘Nun of Your Business’: Unveiling a Croatian love story
EDITORS' PICK
Omicron now shows up in 90% of samples sequenced – Duque
4.7 million Filipinos have received booster shots, but that’s still a ‘low’ number – Galvez
‘Not yet the end’: Lawyer says Marcos Jr’s DQ cases to take lengthy process
Over 3 Million worth of prizes to be won at Smart Padala’s SENDali Manalo Promo!
Acer starts the year off strong with the Aspire Vero National Geographic Edition
The best of bayside and city living at SMDC’s Sail Residences
MOST READ
Duterte asks: ‘Is COVID-19 airborne?’ Duque blames spread on ‘token compliance’ with rules
Marcos Jr. visits Cebu, stands as ‘ninong’ to mayor’s son
‘Not yet the end’: Lawyer says Marcos Jr’s DQ cases to traverse lengthy process
Morissette Amon recovering after confinement for diverticulitis, tests positive for COVID-19
Don't miss out on the latest news and information.