Liza Soberano gets emotional on women’s struggles: ‘So unfair that we have to go out every day in fear’ | Inquirer Entertainment
Close
menu
search 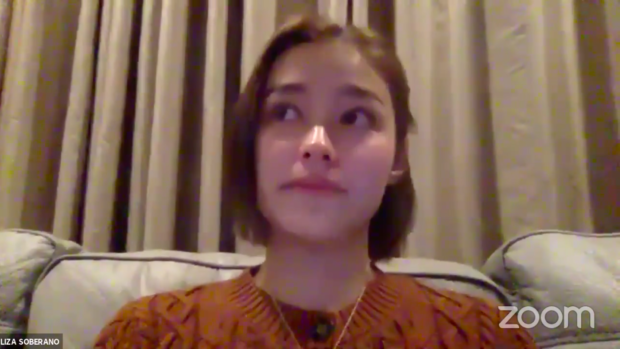 Liza Soberano showed her passion for fighting for the struggles of women and children in a recent webinar by Gabriela Youth. Image: Facebook/@GabrielaYouthPH

Liza Soberano stressed the importance of taking a stand, especially when it comes to the issue of violence against women and children, citing her own experience of defending herself.

The actress took the time to address an online audience at the Gabriela Youth webinar “Mga Tinig ni Nene: Reclaiming Our Voices on the International Day of the Girl Child” on Tuesday, Oct. 13, while she is in the United States caring for her grandmother.

Soberano’s statements begin at the 57:00 mark.

Mga Tinig ni Nene: Reclaiming Our Voices on the International Day of the Girl Child Live!

The “Alone/Together” star became emotional as she recalled women she knew who faced gender-based struggles.

“I find it so unfair that we women have to go out every day in fear of getting catcalled, in fear of dressing a certain way and getting called out for the way we’re dressed.”

“I fear that my nieces and my future children won’t be able to go out in a safe environment. That’s why I find it so important to start spreading awareness to future generations as early as now so that we can create a better future for everyone.”

Soberano, 22, opened up on finding her voice as an actress, saying that she was hesitant before because of what others would say.

“Ang paniniwala ko dati ‘pag artista ka, umiiwas ka sa lahat ng issues (I believed before that if you are an actress, you should avoid all issues),” she said.

“I was afraid that people would judge me. They would say what do I know, I’m just a girl, I’m just an actress.”

However, her perspective shifted after receiving widespread support when she filed a case against a social media user who made a rape remark against her.

“A lot of my supporters… messaged me and were saying thank you. And honestly I cried because I didn’t realize how many women were struggling to stand up for themselves.”

She also urged fellow women and influencers to use their voice for social issues.

“As a woman, as a Filipino artist, I think that women and influencers alike should start speaking up,” she said.

“They can contribute not only awareness about these issues but also encouragement and confidence to our fellow women and children – that they need to learn to stand up for themselves.”

Soberano cited women she admired such as Angel Locsin, Angelina Jolie and Emma Watson as her inspirations to talk about social issues.

“The norm of society has conditioned women and children to stay quiet when dealing with hardships and struggles because nobody is going to do anything anyway. Yet why do they also expect us women, women alike and children, to remain resilient through these struggles?” she said.

“Because change cannot be just the responsibility of the people who need it most. They need the support of everyone, especially those of the highest power, if we are to see true change.”

Soberano has also advocated against online sexual exploitation of children (OSEC). Last May she spoke in a webinar organized by Sen. Risa Hontiveros where she gave her insights on the issue, as OSEC has become more rampant during the coronavirus pandemic.  /ra