WATCH: Dimples Romana tears up in reunion with kids after lock-in taping 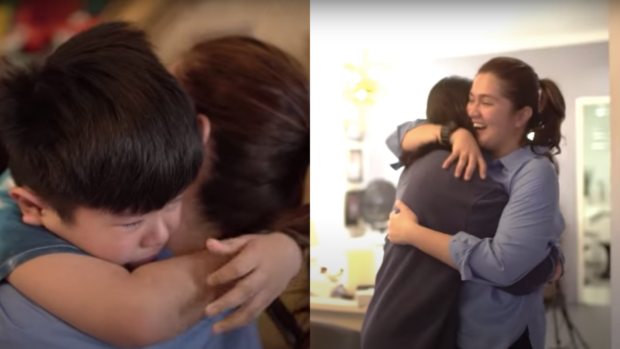 Dimples Romana had a heartwarming reunion with her family after living away from them for the lock-in taping of an upcoming TV series.

Her husband Boyet Ahmee, who was part of the reunion surprise, posted a video of the sweet encounter on his YouTube page last Sunday, Oct. 11.

He began the surprise by waking up their kids Alonzo, 5, and Callie, 16, in the early morning of Oct. 10. After getting out of their beds, he asked them to sit at a table with him and talk about Romana’s time away from home.

Callie said that it was “weird but not weird” for Romana to be gone for almost two weeks since they know it is a part of her career. Meanwhile, Alonzo admitted that he missed teaching his mom how to play the popular video game “Minecraft.”

Though they are used to Romana having to be away for long stretches of time due to work, Ahmee stated that it has still been hard to not have his wife around.

In the middle of the supposed interview with his kids Ahmee, someone suddenly rang their home’s doorbell. Callie and Alonzo then made their way to their front door to see the guest.

When Callie opened the door, Romana appeared and said “Surprise!” Callie laughed and said she was initially scared because their house’s gate was open.

As for Alonzo, he quickly broke into tears at the sight of his mother. Romana then crouched down to greet and hug the tearful Alonzo.

“I love you, Mom,” he told her while crying.

Alonzo’s adorable reaction to her return to their home also led Romana to shed a few tears as she continued to hold her son. After their hug, Callie later leaned in to embrace Romana and eventually teared up as well.

Following her sweet reunion with her children, the actress jokingly asked Boyet why was he not crying. Boyet then made a funny face at the camera, and said, “Naiiyak ako nandito na siya (I am tearing up [because] she is here already).”

Romana later shared the video on her Instagram page and praised all of the overseas Filipino workers (OFW) who are constantly away from their families.

“You are all heroes,” she said.

Romana is set to star alongside Ian Veneracion, Sue Ramirez, Ariel Urieta and Gloria Diaz in an upcoming TV series called “Oh My Dad.” The said program will be airing on TV5 soon. JB