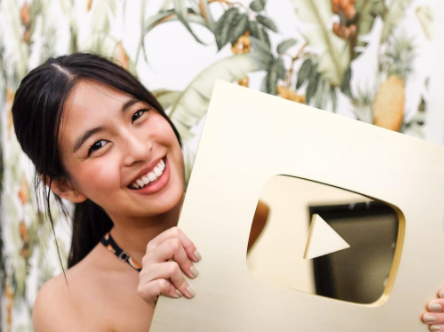 Actress-singer Gabbi Garcia has marked a new online milestone as she received the YouTube Gold Play Button after gaining over 1 million subscribers.

“WE DID IT GUYS! [My] gold play button is finally here!!! Thank you again from the bottom of my heart!!! [Love] you all!!!” Garcia announced on Instagram yesterday, Sept. 15

Garcia currently has around 1.08 million subscribers on her YouTube channel, which she started in 2017. She posts a variety of content, ranging from song covers to house tours, and takes on other topics.

WE DID IT GUYS! 🥺♥️ my gold play button is finally here!!! 😭✨🤍 Thank you again from the bottom of my heart!!! ♥️ love you all!!! @khalilramos We unboxed this gold play button earlier during our Wine Night livestream (IT WAS SO MUCH FUN!!) For those who missed it, you may still watch it! 🍷🍾 Uploaded on my youtube channel! Link on my bio 🥰

To mark the special occasion, Garcia held a “Wine Night” livestream last night on her channel together with boyfriend Khalil Ramos.

Aside from drinking wine, of course, the young artist unboxed the Gold Play Button for the first time live in front of fans.

Garcia told Ramos that it is “our milestone” as she notes that they built the channel together.

Garcia also revealed that they have recently worked on a new project together, although the couple cannot disclose details yet.

“Exciting siya kasi first time namin siya ginawa (It is exciting because it is the first time we have done that),” she told fans.

Garcia and Ramos have been a couple for over three years now and they marked their third anniversary on Feb. 22. The two last starred together in the 2019 music-themed coming-of-age film “LSS”. JB