Season 2 of ‘The Boys’ finds team on run from law 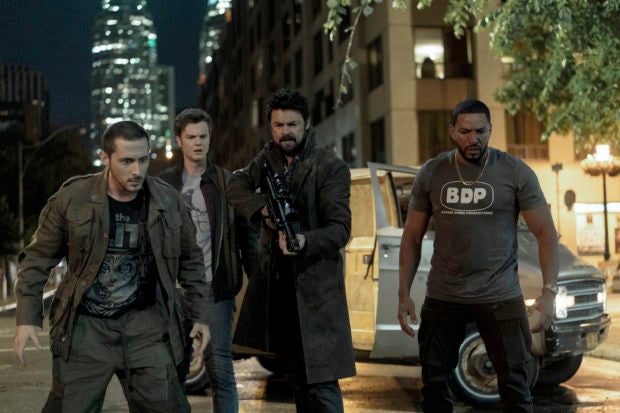 NEW YORK — The upcoming season of “The Boys” has so many surprises, revelations and themes ripped from today’s front pages that some actors are wondering if their showrunner has psychic super abilities.

“I don’t know what kind of crystal ball Eric Kripke has … we shot this show last year, July to November. And when this show airs in September, there will be points where you would think we were shooting during quarantine,” said Laz Alonso, who plays Mother’s Milk. “There is so (many) moments of social unrest that hadn’t happened yet that it’s almost eerie.”

Amazon Prime Video’s hit superhero show is hoping to up the ante of shock, thrill, action — and ultimately success — that it garnered last year during its debut. Although it was one of Prime’s most-watched series, it’s no longer a surprise and will now play the role of incumbent hoping to get reelected.

“I was so happy with how season one turned out and to either hit or exceed that bar was really stressful,” said Kripke, known for leading the fantasy drama “Supernatural”. “Where I landed was not to try to go bigger because that’s sort of unsustainable…But instead, try to go deeper and try to create a more intense, more insane, more emotional season.”

Based off the comic by Garth Ennis and Darick Robertson from which the show also derives its name, the series follows The Boys, a small group of mercenaries, as they chase a popular and famous ensemble of A-list superheroes called The Seven.

The Boys, headed by Billy Butcher (Karl Urban), Hughie Campbell (Jack Quaid) and Alonso are threaded together by their individual vendettas against the “heroes,” but these aren’t the usual squeaky-clean icons found from Marvel or DC Comics. 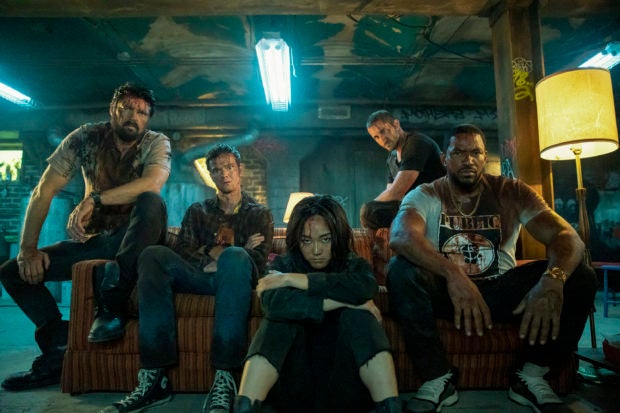 This (very) gory, not-for-kids action show features the superheroes, known as “supes,” as they chase glory often by immoral—and many times illegal—choices. Vought, a powerful and influential company led by CEO Stan Edgar (Giancarlo Esposito) is in full control of their images, marketing them to the public while hiding their dirty deeds. It was revealed that a formula called Compound V is what gives these heroes their powers.

The Seven comprises an extremely diverse set of characters — some from the source material, others altered by Kripke — of different ethnicities, genders, sexual orientations and political ideologies. Not following the typical good versus evil plots, Kripke’s deeper dives this season include today’s issues of systemic racism and capitalism.

“(In) episode four, there’s an African American teen who gets pulled over by a superhero and it goes poorly,” Kripke said. “I do get asked that question of do we have a crystal ball? And my response is like these were issues a year ago, five years ago, 10 years ago, 50 years ago. (They) just happened to be in the front of people’s minds now.”

“It’s really cool to explore very, very real issues from this slightly heightened and sometimes not-so-heightened from reality place,” Quaid said. “We don’t have to pretend that the world’s not on fire for our show.”

“The world is kind of feeding us a lot of content,” said Moriarty whose character’s romantic relationship with Quaid’s character is a major storyline. “I just feel kind of lucky to be on a show that is of the zeitgeist, frankly, because I don’t like to pretend that the world is in an OK place, which it especially isn’t now more than ever.”

The first season juxtaposed the concept of celebrity and power with morality while also tackling fascism and corrupt politics. Some of those themes continue this season as The Boys are on the run after being blamed for the murder of Madelyn Stillwell, the Vought vice president, although the culprit was actually Seven leader Homelander (Antony Starr).

Supe terrorists are also introduced, as Homelander helps get Compound V overseas in a ploy to instill fear in the American public and increase dependence on the supergroup. Viewers will meet new member Stormfront, a charismatic, social-media friendly woman whose presence fans the flames of bigotry.

“Absolute power corrupts absolutely…and I think these are very damaged, powerful, flawed individuals,” says Starr, the New Zealander who plays the blond, blue-eyed America-first Superman-Captain America mashup. “The way we represent them is probably a more honest take of what these superheroes would be like. I don’t believe your moral compass would remain at True North if you had all these powers like they do in other (comics).”

Amazon is betting that these complex superheroes will yield super ratings as the battle for original streaming content wages. Positioning itself as Prime’s flagship show, “The Boys” may have some help as the COVID-19 pandemic halted or delayed many previously scheduled productions. Season three has already been given the green light. 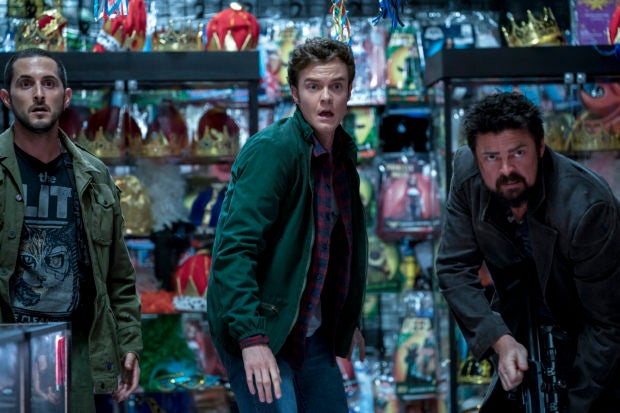 (From left) Tomer Capon, Jack Quaid and Karl Urban from the series “The Boys.” Image: Amazon Studios/Panagiotis Pantazidis via AP)

To capitalize on the show’s hype, Amazon Prime Video is switching up the release strategy from a binge model to a more traditional approach. The first three episodes will arrive Friday before pivoting to weekly releases through the rest of the reason.

“I would say if there’s any real meta message of the show, it’s have some healthy skepticism…question some institutions. Question capitalism. Question your leaders. Question your celebrities,” Kripke said. “Have a healthy curiosity because the one thing that they don’t want is an educated populace.”

Esposito, nominated for two Emmys this year for “Better Call Saul” and “The Mandalorian”, hopes the show forces fans to view their own reflection.

“It’s really about seeing our humanity in a different way because humanity is connected to intention. And we all have faults and we all have places where there’s a chink in our armor, where we’re a little weak,” Esposito said. “But being able to look at that with compassion and understanding, that would be the beginning to access our superhuman abilities and powers.” IB