WATCH: Sharon Cuneta ‘immune’ to bashers, invites them to subscribe to her channel 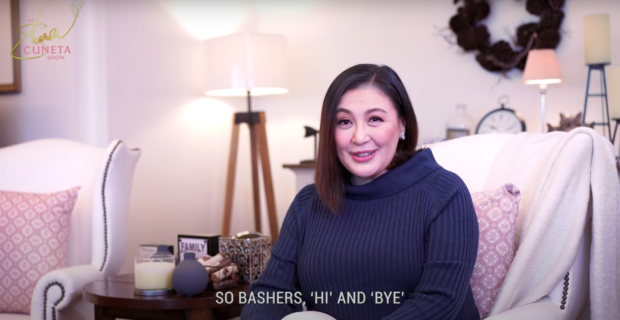 Sharon Cuneta is handing over a white flag to those who have been criticizing her through the years by inviting them to watch her newest vlog series on YouTube.

The Megastar said that she has been immune to her bashers after decades of being in the limelight as a showbiz personality. The actress dedicated “The Sharon Cuneta Show” to her loyal Sharonians, as well as to her bashers.

“I can forgive and I can forget because things have happened and people have changed,” Cuneta said on her vlog “Dear Bashers,” uploaded on her YouTube channel last Wednesday, Aug. 19.

In her new video, the Megastar discussed how she has been dealing with the negative comments she receives online.

(It cannot be avoided, I guess it goes hand in hand with being a public personality. Especially since I have a husband who is a politician, while I am a showbiz figure…it became more chaotic.)

Cuneta likewise addressed some of the issues she has been involved in, such as her post about her golden Rolex watch last July.

(My friends, I have been in show business for 42 years, when did I ever brag to you guys about a watch?)

The lesson Cuneta learned from the experience is to never post when your feelings are hurt.

(You should not post when you are feeling bad. Back then, my feelings were hurt, of course I am only human, and what they wrote hurt me.)

In relation to posting when she is “highly emotional,” Cuneta briefly addressed her former feud with director Ronald Carballo and said that it is all “water under the bridge.”

The veteran singer admitted that she was at fault for posting her long message in public. Cuneta has also forgiven Carballo for his “vicious, totally untrue posts,” but is uncertain whether they can “restart” their friendship.

Cuneta said that at her age, she has learned to choose her friends wisely and cherish those who are dear to her heart.

The Megastar also talked in detail about the possibilities of her vlog series, including a potential acting collaboration with Judy Ann Santos, musical numbers or concerts through Zoom featuring her musician friends, and more.

Lastly, Cuneta told her bashers to take it easy.

(Maybe you want to subscribe. Let’s all be chill because I am already immune to you guys.)

(Take it easy, especially now that there is a pandemic, your blood pressure might get high because me, I am no longer affected by you. We’re friends now, that’s okay.)  /ra

‘Unforgettable friend’: How Angel Locsin checks on Sharon Cuneta during times of need

Sharon Cuneta hints at new project: ‘Start of something all-new!’