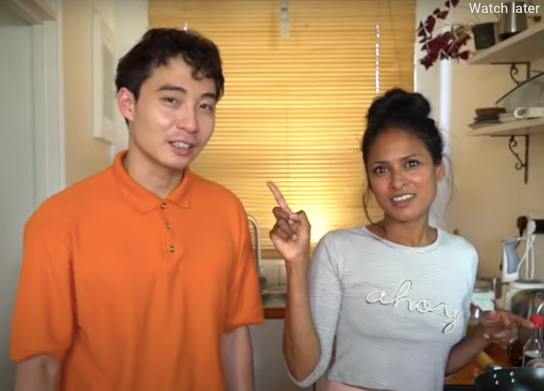 Malaysian comedian Nigel Ng, who goes by Uncle Roger, has finally gotten together with BBC Food host Hersha Patel to cook proper egg fried rice as she tries to redeem herself for her “crimes against rice.”

Patel, an award-winning presenter and filmmaker, previously clarified that she does know how to properly cook rice when she last met with Uncle Roger, whose video reaction to Patel’s rice cooking went viral.

The comedian visited Patel’s home to give her a chance to prove her cooking skills as seen in a vlog uploaded on Uncle Roger’s YouTube channel on Aug. 9.

To Uncle Roger’s relief—and other Asians’—Patel this time washed the rice before cooking, unlike in the BBC video where she washed the rice afterward before draining the water with a colander.

However, Uncle Roger is still not satisfied with Patel’s technique in measuring the needed amount of water for the rice, which is by using cups.

“Haiya, she measure water with cup again. Just use finger! All Asian people use finger! This is magic measuring,” the comedian stressed. “You’re not scientist! Why use measuring cup?”

When Patel put the lid on the pot halfway to let the steam escape as she brought the water to a boil, however, Uncle Roger explained that he does it with the lid fully covering the pot so the steam can cook the rice.

Eventually, he kind of accepted the technique and commented, “Oh okay, okay. Different culture make rice differently — it’s just that some culture is wrong,” to which Patel replied with a laugh.

When Patel noted that she does not know anyone who owns a rice cooker, Uncle Roger quipped that it is “because Auntie Hersha don’t have any cultured friend.”

After Patel brought up other kinds of rice dishes such as the Spanish paella and the Italian risotto, Uncle Roger noted that white rice is still the best.

“What about biryani?” Patel then asked, to which the comedian replied, “Okay Uncle Roger like that. Indian people good at rice also.”

After Patel, who is of Indian descent, replied “really?!” in disbelief, Uncle Roger clarified “Yeah — maybe except you.”

To Patel’s relief, Uncle Roger finally approved of her rice cooking, although the comedian’s standards might just be still a little too high.

“Uncle Roger at first skeptical, like, ‘this woman gonna mess it all up,’ but now, I think at least four out of 10,” Uncle Roger said.

Despite not having garlic, the egg fried rice cooking session, which was filled with a couple of hilarious back-and-forths between the two, ended up quite well.

“It’s good, it’s good!” Uncle Roger commented as he ate Patel’s dish. “If I buy egg fried rice like this from Chinese takeaway, I will not be their customer ever again. But for home cooking, very nice!”

Despite giving Patel’s rice a measly four out of 10, Uncle Roger quite enjoyed the egg fried rice meal and gave it a rating of six out of 10—well, that is, if Patel’s “Anglo-Indian” egg fried rice fusion she made by the end is not counted.  /ra