Solenn Heussaff and Nico Bolzico performed their own rendition of Billy Joel’s song “Vienna” with a hilarious twist.

“Something that @nicobolzico and I have been preparing for you! So happy to share it today!” the actress said on her Instagram page yesterday, Aug. 4, alongside a video of their cover.

Heussaff belted out the tune’s lyrics while Bolzico appeared to be playing the piano.

As Heussaff reached the song’s chorus, Bolzico sang a linewhile the actress shifted the camera’s angle. When Heussaff moved the camera to the side, she showed that Bolzico was not actually playing the piano, but was just folding clothes.

Following Heussaff’s post, her sister-in-law Anne Curtis said she has been trying to get Erwan to perform a duet with her as well.

“There’s a song I really really want to cover!!!” she said while asking Heussaff and Bolzico to convince Erwan to agree to Curtis’ request.

“Please please!” she added. “I’ve been asking him the past [two] days!” 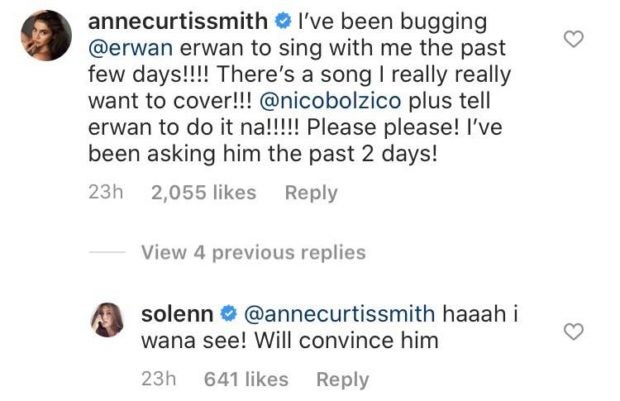 Heussaff told Curtis that she wants to see their duet happen and that she will convince her brother Erwan to agree to it. Meanwhile, musicians Kean Cipriano and Mica Javier laughed while lauding Bolzico for his joke.

Bolzico, known for being a funnyman, has come up with various jokes with his loved ones. Last month, he flexed his “artistic side” by creating a stick-figure sketch of Heussaff.

He also made a wacky, short tutorial on how to carry a baby with his and Heussaff’s firstborn, Thylane. The couple welcomed their daughter into the world last Jan. 1.  /ra