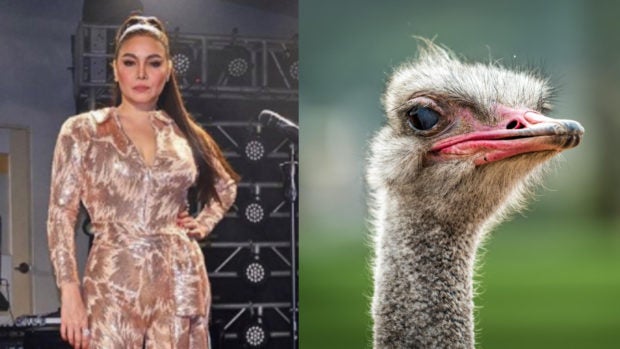 After an ostrich running loose at a private subdivision in Quezon City caught the attention of the public during the COVID-19 crisis, some could not help but get creative by making memes and parodies of the peculiar sighting.

Comedienne K Brosas was one of those who found humor in the video, as she added voice-overs on two videos documenting the event, using TikTok.

She appeared to be personifying the ostrich while it was running freely in the subdivision. The comedienne also showed her parodies via Instagram yesterday, Aug. 4.

(Breaking! There was an ostrich spotted roaming around QC, lol! Sorry I could not help myself, sound on!)

As the ostrich appeared to be confused while running on the street, Brosas narrated in voice over, “Sino naglaro ng Jumanji bakit ako nanditey?” (Who played Jumanji, why am I here?)

“A-ano na nangyayari…teka lang (What is happening? Wait a second)!”

(Is this the first time you are seeing a gay ostrich. Oh, what? Where are my heels? Wait, where am I supposed to get my relief goods?)

A resident of Mapayapa Village 3, Dino Rivera, documented the ostrich running along their subdivision’s main village road and uploaded it via Facebook.

Another view of the ostrich showed the creature trying to get past the guardhouse of the private subdivision.

When the video taker shrieked while the bird approached the gate, Brosas did another V.O.: “Ay may bakla rin sa labas (Oh no there’s another gay person outside)!”

“Oops social distancing,” Brossas narrated as the ostrich turned around.

The guard of the subdivision shouted at the creature that it could not leave the premises because it does not have any gate pass or ID.

The comedienne also joked about getting a quarantine pass in the barangay hall while the ostrich retreated.

A certain Mark Lawrence Molina Umipig uploaded another video on his Facebook account yesterday. He also showed how some citizens worked together to bind the animal.

According to Rivera, he heard from security guards of the subdivision that the ostrich is owned by another resident. There were reportedly two ostriches running around the area, both of them were caught by the authorities. JB

K Brosas silences basher by reporting them to their employer