‘Hamilton’ film director reveals details—30 cameras used, which songs were shot with and without audience

LOS ANGELES—To shoot his filmed version of “Hamilton,’ which has been getting raves since it began streaming on Disney+, director Thomas Kail used no less than 30 cameras, shot live performances in two days, but there were 13 songs that were mostly captured without an audience present.

These were among the interesting details shared by Thomas, who also directed the original on and off Broadway productions of Lin-Manuel Miranda’s universally acclaimed musical on the story of American founding father Alexander Hamilton, but told in a contemporary score of hip-hop, jazz, R&B and Broadway.

“I made the film over the last three years, but we shot it in three days,” said Thomas, who directed his wife, Michelle Williams, in the miniseries, “Fosse/Verdon.” The couple welcomed their first child last June.

“We shot on June 26, 27 and 28 of 2016,” Thomas added. “We shot two live performances straight through with an audience—no stopping. That was the matinee on the 26th and the evening on the 28th. We had a little bit of time on the 26th after the show, all day on Monday and a little time in the beginning of the 28th to then be onstage, get some over the shoulders and get the Steadicam in there without an audience.

“So, we have two performances that were live. The film you see is taken from both of those. Then, we also had 13 numbers of the possible 46 that we got onstage and did it without an audience. So, the vast majority of the 33 numbers was all taken from the Sunday or the Tuesday.” 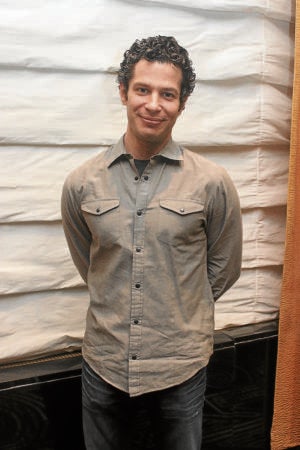 He revealed, “Then we had some of the bigger numbers out there—‘Hamilton,’ ‘My Shot,’ ‘Satisfied,’ ‘Helpless,’ ‘Non-Stop,’ ‘One Last Time,’ ‘The Room Where It Happens.’ Those were numbers that we were able to get onstage, and we did a couple takes of those without an audience. Then we sifted and sorted.

“I had six cameras that were shooting on the Sunday with different operators and then three fixed cameras or nine total. Then, I changed all the positions for the fixed cameras for the Tuesday so the multiple gets high really fast, but that’s how we made it.”

The 42-year-old Alexandria, Virginia native shared that he used a total of 30 cameras. While we enjoyed watching “Hamilton” at Richard Rodgers Theatre in good seats, the filmed version’s close-ups and shots from various angles give viewers at home the best vantage point. As a result, the film lets us appreciate the musical on a more intimate, visceral level.

The director, who once worked as an assistant of actress Audra McDonald, explained about filming those 13 songs minus an audience: “Most of the time, when we would do those numbers, even without an audience, we would run the whole number, just because we wanted to see what we could get. The numbers are not particularly long. And sometimes, it takes more out of your day to stop and start, as opposed to just run the whole thing, which takes three minutes. You know that some of it will be more usable than others in terms of positionings and angles.

“But, for those numbers, we were able to be onstage, in the center of the action, to have real proximity to the performers. And one of the things that I was conscious of throughout because Andy Blankenbuehler’s (choreographer) work is so essential for our show.

“Our show is not just about the principals—it’s about the entire ensemble, and so much of our storytelling is done in the physical vocabulary. If I’m going to close up, it means I’m not on that dance step. It’s very hard to do both those things. So, it was a real balance of making sure that I wanted to give intimacy and proximity, which you have in cinema.

“It is a little more challenging in the theater. You must also get the stage picture and make sure that the storytelling of the entire group was represented. So that was a real balance that I worked on with my editor, Jonah Moran.”

The filmed version of “Hamilton” marks a new highlight in the long friendship and collaboration of Thomas and Lin-Manuel. Thomas was a senior, while Lin-Manuel was a freshman at the Wesleyan University, but contrary to reports, they did not actually meet in the school located in Connecticut.

“Lin-Manuel and I met in 2002, 18 years ago, after he graduated from college,” Thomas clarified. “We started working on ‘In the Heights.’ We worked on that for five years before the first production, then it was on Broadway in 2008. So, we became very close collaborators.

“In 2009, Lin told me that he read this book about Alexander Hamilton. He thought that there might be an album there, not necessarily a show. And we started talking about it a little bit.

“Then, Lin went away and was doing other stuff. I was doing stuff. Then in 2011, he had another song. So, it took him two years to write the first two songs. I said, ‘Why don’t we start working on it more regularly?’ So, we did that in the end of 2011.

“We worked on it for four years together. Until 2015, when we did Public Theater, then we transferred to Broadway. While we were on Broadway in the late part of 2015, we started talking about the idea of filming the stage version and preserving this incredible cast—their performance and trying to capture theater.” 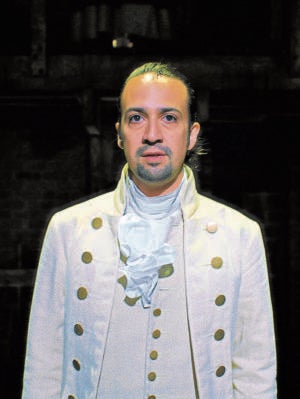 Thomas stressed, “Because theater always disappears. It goes away as soon as the lights come down, whereas cinema, film and television can live on.”

Jon M. Chu got to direct the movie adaptation of “In the Heights.” Thomas, who is called Tommy by his friends, was excited about Jon’s finished version of the musical.

“Jon has become a friend,” he emphasized. “He showed the film to me, and I wish you could see it right now. It’s fantastic. He captured the spirit of the musical. The performances are so dynamic. He built the world. I was an emotional wreck watching it.

“Anthony Ramos, who’s in ‘Hamilton,’ plays Usnavi, the lead. So, that was incredibly meaningful for me to see Anthony in the center of a film and he’s extraordinary in it. I can’t wait for the world to get a chance to see what Jon and our friend Quiara Hudes, who wrote ‘In the Heights’ with Lin, made. It’s gorgeous.”

Originally scheduled to open last June 26, “In the Heights” will now debut in cinemas in June next year due to the coronavirus pandemic.

In the meantime, since “Hamilton” is available on Disney’s streaming service, millions of viewers have seen it in the safety of their homes.

Thomas said, “I was just interested in trying to create an experience with the film of ‘Hamilton’ that would let you know what it felt like to be in the theater in June of 2016 in New York City at the Richard Rodgers Theatre. That was the intent.” Well done, Thomas.