LOOK: G Töngi recounts struggles of being a mother in college 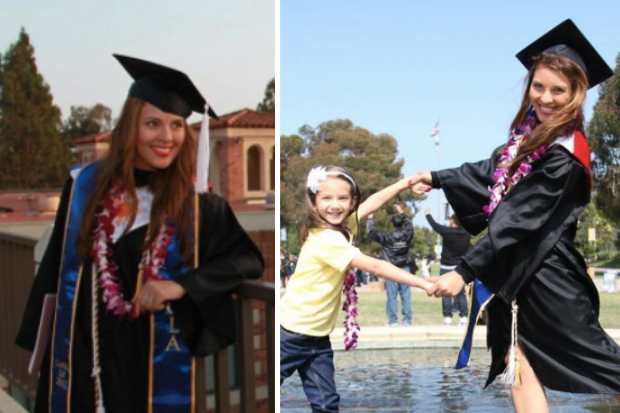 G Töngi with her daughter Sakura during her graduation from UCLA back in 2011. Image: @gtongi

Former actress and television host Giselle “G” Töngi looked back at her struggles from around a decade ago when she was still attending college as a mother of two.

Now marking the ninth anniversary of her graduation from the University of California, Los Angeles (UCLA), she recounts to fans her experience and assured fresh graduates that they will reach their dreams even amid the COVID-19 pandemic.

“There are those moments in your life that feel the most momentous for one reason or another… this was mine,” Töngi said on Instagram earlier today, July 2, sharing snippets from her graduation in the United States nine years ago.

“After becoming a mother at 27, I knew I wanted to apply myself to be able to reach what I envisioned. The day I graduated from college was bittersweet because of the untraditional path I pursued,” she added.

Töngi, married to American Tim Walters since 2005, recalled that she first spent two years in a community college when her daughter Sakura was only 2 years old and while she was pregnant with son Kenobi. Her family eventually moved homes to get closer to UCLA, Töngi’s dream school.

“I am one of only two FilipinX in the entire Communication studies major that Fall. It takes me another 2.5 years to get to this day in 2011 because I petition for a double minor in film, television, digital arts and theater,” she said of her time at UCLA.

Töngi stressed that those years were “the most challenging,” as she was then “maneuvering a young family with the demands of loaded coursework in a quarter system.”

“Those that are in a quarter system know how grueling 10 weeks of instruction can be. I slept late every evening, only hitting the books after the children got tucked into bed after bath & story time,” she emphasized.

“I share my story because again, I find myself back in school, family by my side, constantly cheering me on under similar yet historic times. I thrive when challenged especially under unconventional occasions,” the actress added.

Töngi announced in October 2019 that she is studying once more for a master’s degree in nonprofit management at the Antioch University in Culver City, California.

As graduation season is upon everyone again, Töngi advised struggling graduates in her timely post to not lose sight of their goals even during these hard times.

“Now in the midst of a pandemic, I contemplate the many graduates, unsure of the world they will be walking into. We may have put a pause button on the way in which we move, but the constants remain the same. Hard work, dedication and tenacity will yield the same results. [Self-confessed] goal crusher here,” she noted.

While Töngi understands the difficulty of “trying to be productive and proactive” amid the pandemic, she advises graduates to “focus and battle to rise to the challenges” before them to achieve their goals.

“Keep your eye on a prize and it will happen,” Töngi said. “[Perhaps] not in the way you expect but far more than you can imagine.” JB